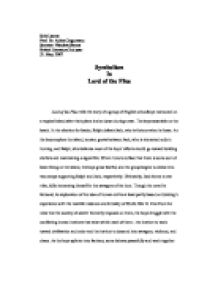 Symbolism in Lord of The Flies

Idris Lacme Prof. Dr. Adina Ciugureanu Seminar: Nicoleta Stanca British Literature 2nd year 31. May. 2007 Symbolism In Lord of the Flies Lord of the Flies tells the story of a group of English schoolboys marooned on a tropical island after their plane is shot down during a war. The boys assemble on the beach. In the election for leader, Ralph defeats Jack, who is furious when he loses. As the boys explore the island, tension grows between Jack, who is interested only in hunting, and Ralph, who believes most of the boys' efforts should go toward building shelters and maintaining a signal fire. When rumors surface that there is some sort of beast living on the island, the boys grow fearful, and the group begins to divide into two camps supporting Ralph and Jack, respectively. Ultimately, Jack forms a new tribe, fully immersing himself in the savagery of the hunt. Though the novel is fictional, its exploration of the idea of human evil is at least partly based on Golding's experience with the real-life violence and brutality of World War II. Free from the rules that the society of adults' formerly imposed on them, the boys struggle with the conflicting human instincts that exist within each of them-the instinct to work toward civilization and order and the instinct to descend into savagery, violence, and chaos. ...read more.

The boulder that Roger rolls onto Piggy also crushes the conch, signifying the end of the civilized instinct among almost all the boys on the island2. Jack is the tallest and strongest of the boys, may represent totalitarism as he does not appreciate the results of the election, eventually using his strength, his aggressiveness, making himself chief and the other boys his tribe. He is a good example that absolute power corrupts everything. Simon represents natural human goodness, because he is the only character on the island that continues being good even when the other boys forget about the rules of society. Some see similarities between him and Jesus. Simon is the only one who can get the fruit for the little ones. Through him they get the fruit, much like through Christ, Christians receive salvation they cannot achieve on their own. Also, Simon freeing the parachutist can symbolize Jesus freeing mankind or man. Simon has a sense of many things which he cannot communicate to the others, and he is in touch with the darker side of humanity. Unlike all the other boys on the island, Simon acts morally not out of guilt or shame but because he believes in the inherent value of morality. He behaves kindly toward the younger children, and he is the first to realize the problem posed by the beast and the Lord of the Flies-that is, that the monster on the island is not a real, physical beast but rather a savagery that lurks within each human being. ...read more.

which is a powerful demon in hell, sometimes believed to be the devil himself. The conversation held also points to Simon as the character representing religion and good will in the novel, which is reminiscent of the temptation of Jesus in the wilderness. "Lord of the Flies" reveals that evil and the terror of the beast is not an external threat, but an inborn evil within the boys themselves. Others have looked at the novel as a work on political philosophy. The stranding of the boys, without any adult supervision, represents a clean slate upon which they have the power to build a small society without reference to any past authorities (past governments, religion, etc.). The abundance of resources for sustaining life sets the stage for a utopia, or a perfect society. Democratic ideals represented by Ralph and Piggy versus Jack's authoritarian systems. The novel illustrates a kind of involution, the way how people experience several states: from innocence to its loss, from brotherhood to man-slaugther and the way how they manage to survive by letting the good feelings to be erased and replaced by their opposites. In this the novel Golding does a magnificent job of symbolism. Through all of these symbols Golding brings emotion thought and symbolism together in Lord of the Flies. The symbols throughout the novel change with the boys and show how they feel about a rage of issues. ...read more.