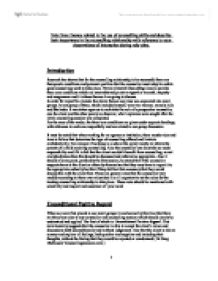 Take three themes related to the use of counselling skills and describe their importance in the counselling relationship with reference to your observations of interaction during role-play.

Take three themes related to the use of counselling skills and describe their importance in the counselling relationship with reference to your observations of interaction during role-play. Introduction Research has shown that for the counselling relationship to be successful there are therapeutic conditions and personal qualities that the counsellor must adopt to enable good counselling work to take place. Person Centred Counselling aims to provide three core conditions which are unconditional positive regard or warmth, empathy and congruence and it is these themes I am going to discuss. In order for myself to evaluate the above themes our class was separated into small groups. In my group of three, which included myself, were two women, namely Julia and Shalinder. It was taken upon us to each take the role of a prospective counsellor, one the client and the other purely an observer, who's opinions were sought after the initial counselling session was completed. For the ease of the reader, the three core conditions are given under separate headings, with reference to each one respectfully and are related to our group discussion. It must be noted that when working for an agency or institution, there maybe rules and laws to follow that determine the type of counselling offered and limits to confidentiality. For example if working in a school the policy maybe to inform the parents of a child receiving counselling. ...read more.

I also noted that Shalinder at no point gave the impression that her own opinions were being forced upon me or her thoughts were ever influencing how I felt. Empathy During our group discussion between myself, Shalinder and Julia, it was important to be empathic when acting as the counsellor. On the basis of empathy I will use my own experiences of the conversation that took place between myself and Julia, in which case I in this given exercise was placed with the task of prospective counsellor. Julia was the client and Shalinder was the third party in a purely observational role. From my conversation with Julia, it appeared to myself that Julia had full confidence in my listening and observing abilities. Julia, in my experience and honest opinion from our conversation, appeared to have a lot of personal problems and restrained emotions, almost fighting to be released in one sweep with myself as the counsellor. These appeared to range from a mixture emotions, namely anger, pain, heartbreak and mistrust, possibly brought about from her reference to an act of infidelity in her personal life. There also appeared to be more deep rooted personal problems and emotions and the feeling of not being appreciated or valued by members of her family, predominantly her mother and father. This, it appeared, stemmed from various situations during her childhood, which have gradually progressed and encompassed her during her adult years. ...read more.

The atmosphere appeared relaxed and the client at ease with her counsellor. This I feel is a good reflection on the necessity and need for congruence in any given counselling environment. I observed throughout our interactions during role-play that a great amount of trust had developed within the group and it was quite amazing to see how much we all opened up after knowing each other only a short time. It is vital that the client feel that the counsellor is consistently real, open and trustworthy for without this they are unlikely to open up and discuss anything necessary for healthy therapeutic growth to occur and I feel that this was achieved. Conclusion When given this task by the tutor it was to assess how each of us within our respective groups could interact and take it in turns as a counsellor, client and observer. This exercise would demonstrate how each one of us listened, communicated and observed what was clearly a variety of emotions conveyed by us all. Also we could assess within ourselves how we demonstrated the three basic themes of counselling skills ,namely unconditional positive regard or warmth, empathy and congruence. I would conclude that this was a valuable exercise in which to demonstrate our understanding and ability to grasp the basic concept of these three themes. Donna Marquise 16th September, 2003. ...read more.