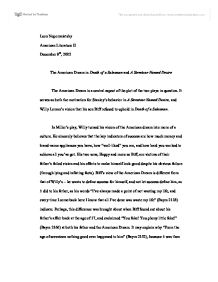 Leon Nepomniatshy American Literature II December 9th, 2002 The American Dream in Death of a Salesman and A Streetcar Named Desire The American Dream is a central aspect of the plot of the two plays in question. It serves as both the motivation for Stanley's behavior in A Streetcar Named Desire, and Willy Loman's vision that his son Biff refused to uphold in Death of a Salesman. In Miller's play, Willy turned his vision of the American dream into more of a culture. He sincerely believes that the key indicators of success are how much money and brand-name appliances you have, how "well-liked" you are, and how hard you worked to achieve all you've got. His two sons, Happy and more so Biff, are victims of their father's failed vision and his efforts to make himself look good despite his obvious failure (through lying and inflating facts). Biff's view of the American Dream is different from that of Willy's - he wants to define success for himself, and not let success define ...read more.

It only relies on whether he likes what he does or not. "Why am I trying to become what I don't want to be? What am I doing in an office, making a contemptuous begging fool of myself, when all I want is out there, waiting for me the minute I say I know who I am!" (Baym 172) - That is Biff, and that is his own American Dream, placed somewhere out west and not in the concrete jungle of the city. Stanley Kowalski's disposition regarding the American Dream in Williams' play is somewhat more elusive in text, yet it can still be inferred from various details. His general straightforward nature, often raw and rude manner and his determinedness are just what it takes to "make it" out there. This is evident from Stella's words to Blanche, saying "Stanley's the only one of his crowd that's likely to get anywhere... It's a drive he has" (Baym 1997), indicating his inner strength and ambition. ...read more.

play poker no matter what and not be nice about it). Neither of them has a submissive personality. A major difference in their dispositions when it comes to the American Dream is that Biff's is more old-fashioned, not only in the sense of going out west, but just kind of to go with the flow and to follow his inner wishes. Stanley does not quite concentrate on dreaming, but has a somewhat personalized version of the dream. This "survivor of the stone age" doesn't care for being well liked and having brand name appliances, he is only determined to move forward and be happy with the way things are. After looking at the aspects of the American Dream and how they were explored in the above plays through the use of the main characters, it can be concluded that it is likely that both authors' aim was to suggest that there is no American Dream "formula", and that in order to succeed, one must be true to himself. 2 ...read more.