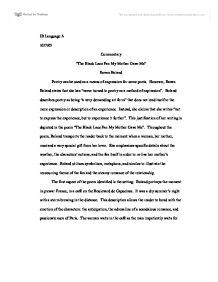 IB Language A 10/7/03 Commentary "The Black Lace Fan My Mother Gave Me" Eavan Boland Poetry can be used as a means of expression for some poets. However, Eavan Boland states that she has "never turned to poetry as a method of expression". Boland describes poetry as being "a very demanding art form" that does not lend itself to the mere expression or description of an experience. Instead, she claims that she writes "not to express the experience, but to experience it further". This justification of her writing is depicted in the poem "The Black Lace Fan My Mother Gave Me". Throughout the poem, Boland transports the reader back to the moment when a woman, her mother, received a very special gift from her lover. She emphasizes specific details about the weather, the characters' actions, and the fan itself in order to re-live her mother's experience. ...read more.

Her purpose is mainly to construct the events so she herself can experience the instant in time further, yet also to allow others to identify with it as well. She feels strongly about the fan and the situation occurring in the poem. There is no evidence that the man was her father or that she was alive when the event happened, therefore she takes it upon herself to articulate the actions and emotions of the characters as she saw it. Boland insinuates several instances of conflict throughout the work. The stifling, stormy weather is used to foreshadow the oncoming gap of information. The reader does not know what happened to the man, so, as lines23-24 state "And no way...you improvise," the reader must come up with their own conclusion. The man might have been caught in the storm and never made it to the caf�. He could have been killed in the war before the gift arrived. The relationship might have ended. ...read more.

The poet also uses the description of the weather to represent how the couples' relationship is. For example, in line 11, she states "The heat was killing." This refers to how lustful their romance was. Another symbolic reference is in the description of the fan. The wild roses are romantic, and they were on silk, which gives a sense of elegance. However, the next line states that the roses were "darkly picked, stitched boldly, quickly". This also refers to the relationship. It could mean that they hurriedly picked each other, and that the romance was somewhat false. The final symbol that Boland uses in the poem is the blackbird. She personifies the bird as a female, and terms its wing as flirtatious, a direct reference to the fan. She also depicts the weather once again, this time as being sultry, just as it was in that moment in the past. The last four lines as a whole may represent what went in the first encounters of the couple: the passion, heat, and flirting. ...read more.