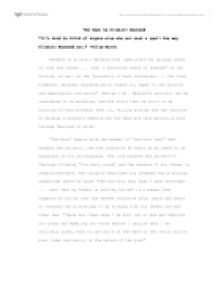 The Boat by Alistair MacLeod

The Boat by Alistair MacLeod "It's hard to think of anyone else who can cast a spell the way Alistair MacLeod can." -Alice Munro Readers of Alistair MacLeod have identified "an abiding sense of loss and regret.... [and] a pervasive sense of sadness" in the writing, as well as the "proximity of most characters ... the final elemental darkness threatening to reduce all hopes to one uniform and meaningless conclusion" (Berces 116). MacLeod's narrator can be considered to be mourning, and the story that he tells is an activity of that process; that is, telling stories has the function of helping a narrator memorialize the dead and thus partially work through feelings of grief. "The Boat" begins with the moment of "terrible fear" that awakens the narrator, and the confusion he feels as he comes to an awareness of his surroundings. The link between the narrator's feelings of being "foolishly alone" and the absence of his father is underscored here. ...read more.

bed bear witness to the extinction of the latest spark and silently await the crushing out of the most recent of their fellows". As the day dawns, he focuses on "the countless things one must worry about when he teaches at a great Midwestern university", contextualizing his occupation and geographical location - both far removed from the world of his childhood and adolescence. With daylight comes the certainty that the past is far removed from the present, that it is "only shadows and echoes ... the cuttings from an old movie made in the black and white of long ago," and with daylight comes "all kinds of comforting reality to prove" that the past is long gone. Despite being figments of his imagination, however, the "call and the voices and the shapes and the boat" had the semblance of reality for the narrator during those early morning hours. The grounds represent a long line of family tradition: "For if there are no signposts on the sea in storm there are certain ones in calm and the ...read more.

In literature writers often use weater and environment not only to create a backgroud for the action, but also to make us understand feelings and emotions of the heroes. It's some kind of a parallel drawn between internal and external: they reflect each other. It also strengthens the setting of the story. In the beginning of the story we have a bright example of weather influence the narrator: winter being cold, severe and gloomy, causes the same gloomy feelings come to the narrator - "Boy, it must be really cold out there; you got tears in your eyes". Actually 3 purposes are followed by usage of such a method: 1) to create general atmosphere and mood of the story; 2) to express the character feelings brighter; 3) to actually emphasize an essence of the events. In short stories we can often see interrelation between the persons or events and the weather for such a genre of literature requires the story being developed within the limited sizes of the work. So an author needs to express the whole variety of feelings through abstract concepts, displaying them in every possible way. ...read more.