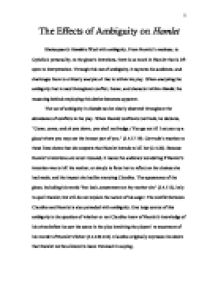 The Effects of Ambiguity in Hamlet

The Effects of Ambiguity on Hamlet Shakespeare's Hamlet is filled with ambiguity. From Hamlet's madness, to Ophelia's personality, to the ghost's intentions, there is so much in Hamlet that is left open to interpretation. Through this use of ambiguity, it captures his audience, and challenges them to critically analyze all that is within his play. When analyzing the ambiguity that is used throughout conflict, theme, and character within Hamlet, the reasoning behind employing this device becomes apparent. The use of ambiguity in Hamlet can be clearly observed throughout the abundance of conflicts in the play. When Hamlet confronts Gertrude, he declares, "Come, come, and sit you down, you shall not budge./You go not till I set you up a glass/where you may see the inmost part of you." (3.4.17-19). Gertrude's reaction to these lines shows that she suspects that Hamlet intends to kill her (3.4.20). Because Hamlet's intentions are never revealed, it leaves the audience wondering if Hamlet's intention was to kill his mother, or simply to force her to reflect on the choices she had made, and the impact she had by marrying Claudius. The appearance of the ghost, including his words "but look, amazement on thy mother sits" (3.4.112), help to quell Hamlet, but still do not explain the nature of his anger. ...read more.

Hamlet is constantly searching for truth throughout the whole play. The constant use of questions by every character, but especially Hamlet demonstrates this search for truth. The ambiguity in the truth itself leaves a question for the audience to ponder, "what is true?" The ghost is said to be Hamlet's father's spirit, though through the play, Hamlet questions the validity of this claim. Though it is later discovered that Claudius was guilty, this still does not prove the identity of the ghost. Ghosts were thought to be demons in disguise in Elizabethan times. They were sent to make a person stray from the righteous path. Despite Claudius' guilt, murdering him in revenge remains a sin. The fact that the ghost told Hamlet to take revenge against Claudius for the crimes committed against him (1.5.7), and that Hamlet had it in his mind that he was to kill Claudius when his soul was impure, just as his father's was as seen in the lines, And am I then reveng'd,/To take him in the purging of his soul,/When he is fit and season'd for his passage? No. (3.3.84-88) The fact that this act would, in most circumstances, send him to hell supports the idea that the ghost may not have the noble intentions that Hamlet is led to believe, but the knowledge it possesses of the method of the late king's death makes the validity of the ghost ambiguous. ...read more.

Even Hamlet, the title character, is extremely ambiguous. Hamlet's entire character rests on his madness. If he were mad, his character would mostly be defined as what appeared before he spoke with the ghost. His values could be identified through his proclamation that "this heavy-headed revel east and west/Makes us traduc'd and tax'd of other nations"(1.4.17-18) with regards to his uncle drinking in celebration. His thoughtful nature may be seen through his "O that this too too sullied flesh" (1.2.129) soliloquy. Much beyond that is uncertain, as after his encounter with the ghost, it cannot be distinguished whether he acts by the hand of madness or sanity. If however, his encounter with the ghost does not throw him into true madness, and his ploy is to pretend to be mad, he has a much more brash nature that can show itself. Though his thoughtful, grieving nature remains true, it is also shown through his killing of Polonius (3.4.23-24) that he can act with much less forethought than originally believed. Shakespeare's use of ambiguity gives many of his characters multiple possible personalities that are often stark differences to each other. This allows him to further explore the depths of characters. Also, where the two personalities share similarities, these are magnified to show the predominant, and important traits of all his characters. CONSIDER A BIT IN P.2 ABOUT INNER CONFLICT OF HAMLET REVISIT THESISS ?? ?? ?? ?? 1 ...read more.