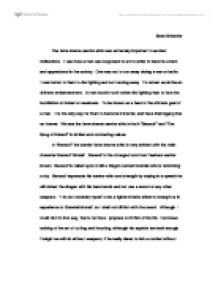 The fame shame warrior ethic was extremely important to ancient civilizations. It was how a man was supposed to act in order to become a hero and appreciated in the society.

Sean Schaefer The fame shame warrior ethic was extremely important to ancient civilizations. It was how a man was supposed to act in order to become a hero and appreciated in the society. One was not to run away during a war or battle. It was better to them to die fighting and not running away. To retreat would be an ultimate embarrassment. A man would much rather die fighting than to face the humiliation of defeat or weakness. To be known as a hero is the ultimate goal of a man. It is the only way for them to become immortal, and have their legacy live on forever. We see the fame shame warrior ethic in both "Beowulf" and "The Song of Roland" in similar and contrasting values. In "Beowulf" the warrior fame shame ethic is very evident with the main character Beowulf himself. Beowulf is the strongest and most fearless warrior known. Beowulf is called upon to kill a dragon named Grendel who is terrorizing a city. Beowulf expresses his warrior ethic and strength by saying in a speech he will defeat the dragon with his bare hands and not use a sword or any other weapons. ...read more.

Deliberately he passes over all the riches because wealth is not a hero's object. Instead what he brings with him are symbolic of his actions and will enhance the only wealth a hero knows - the stories told about him. The downfall of the hero, however, is his unthinking optimism, as Hrothgar warns, and his confidence in his strength. Beowulf is aged and has lost most of his strength when he fights the dragon Worm. Only Wiglaf stayed behind to help Beowulf, while the others ran back and retreated. In his last dying effort Beowulf killed Worm with aid from Wiglaf to finally preserve his warrior ethic and die in battle. "The Song of Roland" features similar aspects to the warrior fame shame ethic as in "Beowulf". "The Song of Roland" features a hero Roland, who really is a hero in the warrior fame shame ethic sense. However, the warrior shame fame ethic is more based on religion than immortality in "The Song of Roland". It is more important to them to preserve Christianity and save disgrace for their kin than for individual achievement or immortality. Roland and his confidante Oliver are set up by his stepfather Ganelon. ...read more.