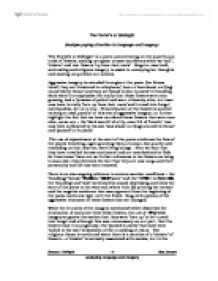 The Florist's at Midnight.

The Florist's at Midnight (Analyse paying attention to language and imagery) 'The Florist's at Midnight' is a poem concentrating on the superfluous trade of flowers, making us appear almost murderous while we 'nail', 'cloister' and tear flowers 'up from their roots'. Maguire uses bold, contrasting and religious imagery to assist in conveying her thoughts and making us question our actions. Aggressive imagery is extended throughout the poem (the 'stems bleed', they are 'cloistered in cellophane', have a 'wax shawl curl(ing) round (their) throat' and they are 'stood in zinc buckets' in 'clouding dank water') to emphasise the reality that these flowers were once growing, had a 'promise of pollen' and were ultimately alive, but have now been brutally 'torn up from their roots' and turned into 'cargo', merchandise, for us to buy. ...read more.

There is an also ongoing reference to various weather conditions ~ the 'bleed(ing)' 'stems' 'cloud' the 'dank water' and the 'chill air is humid'; the 'clouding' and 'mist' mentioned is almost depressing and links the start of the poem to the very end, where 'rain (is) printing the tarmac' and the negative ambience that was apparent from the beginning of the poem continues right until the finish. Maguire's opinion of the aggressive treatment of these flowers has not changed. While the brutality of the imagery mentioned before describes the elimination of character from these flowers, the use of religious imagery supports the motion that they were 'torn up' to be turned into 'cargo' and although this was unnecessary on our part, that the flowers took it courageously; the 'packed buckets' that have been 'nailed to the wall' is symbolic of the crucifying of Jesus. ...read more.

and works with the suggestion that these flowers are superfluously ripped from the ground. Contrast can also be seen in the line 'all night the chill air is humid...' This poem has regular three line verses with no rhyme scheme; this regularity and continuity suggests that the flowers will always be 'torn up from their roots' and the image of a 'bucket...nailed to the wall' along with the metaphor of 'rain printing the tarmac' by the flowers also suggests permanence, supporting this theory. Enjambment is used frequently throughout the poem, helping it flow from verse to verse mirroring the number of flowers 'spill(ing) down from tiered shelving' and breathing to form 'pools...of mist'; this adds life to the flowers and gives a feeling of continuity. I previously mentioned that this poem makes us query our mindless actions as humans and it does, but on a wider scale than just the destruction of flowers. ...read more.