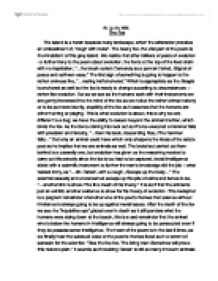 The Fox The island is a harsh desolate rocky landscape, which the alliteration provides an embodiment of, "rough with rocks". The tawny fox, the vital part of the poem is the inhabitant of this grey island. We realize that after millions of years of evolution - a further irony to the poem about evolution, the fox is at the top of the food chain with no trepidation, "...the brush curled /Demurely as a pennant furled, /Signal of peace and self-won ease." The first sign of something is going to happen is the rather ominous line, "...resting half anchored." Which is appropriate as the Beagle is anchored as well but the fox is ready to change according to circumstances - rather like evolution. But as we see as the humans work with their instruments we are gently immersed into the mind of the fox as we notice the rather animal naivety or to be put more bluntly, stupidity of the fox as it assumes that the humans are either hunting or playing. ...read more.

that the animal who is below the humans in intelligence will always going to be persecuted even if they do possess some intelligence. The heart of the poem is in the last 8 lines, as we finally hear the subdued voice of the poem's themes flood as in a torrent of sarcasm for the scientist. "Dies the live fox. The living man /Somehow will prove this nature's plan." It sounds as if mocking Darwin to kill so many innocent animals to prove a theory that links us being animals and so why should we kill our fellow animals? This is a subtle reminder of human nature and greed as we are lead to believe that just for the Nobel Prize and fame Darwin did the deeds of killing the animals to prove the point of the nature of evolution which the poet with his economical use of words summed it up in a rather sarcastic and poignant line "Selected by his larger skull to crack the other." ...read more.

The poem is full of strong images of pity and suffering, "For ever, the inquisitive eye /Starting and glazing to eternity." The poet seems to suggest that science is the main cause of suffering. At the same time he makes it clear that he believes that human nature has a part in it as well. The rhyme consists of full and half rhymes, the moral is inferred through delicate hints. The poet had he not put the extract from Charles Darwin's The Voyage of the Beagle would have written a very misunderstood poem indeed. If you remove the extract, you seem to see parts which looks like that the fox is being hunted and that the hammer is actually a hammer on the gun, e.g. "stand earnestly about a post...peer along a tube," this could be misunderstood as a gun on a tripod with a range finder. "The hammer falls," this is very easily misinterpreted as a hammer on a gun. So one can see the importance of the extract of the Voyage of the Beagle. Philip Xiu 10SK ...read more.