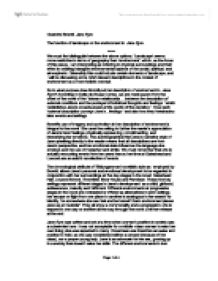 The function of landscape or the environment in Jane Eyre.

Charlotte Bront�, Jane Eyre The function of landscape or the environment in Jane Eyre. ***** We must first distinguish between the above options. 'Landscape' seems more restrictive to terms of geography than 'environment', which, as the focus of this essay, I am interpreting as referring to physical surroundings and their effect in creating intangible environmental aspects of the social, spiritual, and atmospheric. Ostensibly this could include certain elements of landscape, and I will be discussing some brief relevant descriptions in the context of environment as a more holistic concept. So to what purpose does Bront� put her description of environment in Jane Eyre? According to Delia da Sousa Correa, we are made aware from the offset of the novel of the 'intense relationship... between the description of external conditions and the portrayal of individual thoughts and feelings' which 'establishes Jane's consciousness at the centre of the narrative'. How each 'external description conveys Jane's...feelings' and also how they foreshadow later events and settings. Bront�'s use of imagery and symbolism in her description of environment is integral to the novel. She uses the setting to further the reader's appreciation of Jane's inner feelings, physically expressing, complimenting, and intensifying her emotions. The autobiographical first person narrative style of Jane speaking directly to the reader means that all descriptions are from Jane's perspective, and her emotional state influences the language she employs and her use of metaphor and simile. ...read more.

John Rivers. Each setting is dominated by a different tone. At Gateshead the tone is passionate, superstitious and wild, reflecting the narrative focus on Jane as a child - irrational and rebellious. The impact of the house is oppressive; it is not Jane's home. The opening scene is one of isolation in the midst of a busy familial setting, where Jane is partitioned by a curtain, a reoccurring theme in the novel. The Gothic is especially predominant is Bront�'s description of the red room. The crypt, or cell-like environment foretells Jane's future experiences. There are allusions of anger, inflammation and passion, of Bertha's imprisonment and of the fire at Thornfield. At Lowood the tone is cold, hard and restrained. At this point in the novel, Jane is introduced to the reality of the world; the constraints placed upon women by men in society and also to death. With all it's rules, Lowood is oppressive on a larger scale, but still a release from Mrs Reed and a chance for Jane to develop. However, all is not to be as Jane hopes, the porridge, which looked so good but was inedible, is symbolic of Lowood being far from the happiest years of Jane's life. Miss Temple's room, and Jane's rock in the stream alone provided safe haven. ...read more.

These scenes are reminiscent of the orchard at Thornfield. They sit on a tree stump (the shattered Chestnut) and Rochester finally proposes to Jane for a second time. Ferndean is a setting where Jane genuinely feels at home, in large part due to the presence of a reformed Rochester. She now owes Rochester nothing; in fact her depends on her. She has all she wants, independence and equality, Rochester's respect as well has his love and her moral sense is satisfied. As a result of this we can see a pattern, from Gateshead and Thornfield to Lowood and Moor House, the novel swings from the irrational to the rational. This reflects the internal divisions in Jane's character, until she finally finds fulfilment at Ferndean. It is important to acknowledge the way in which Bront� uses descriptions of setting not only to create atmosphere, but also to advance the novelistic genres of realism and the Gothic. As Heilman puts it, 'the grim...forest surrounding Ferndean is more than a harrowing stage-set when it is also felt as a symbol of Rochester's closed in life' (Heilman, Charlotte Bront�'s 'New Gothic' Regan 2001 p.213). Bront� does much to further the Realism genre in her descriptions of 'houses, rooms and furniture' (Lewes; da Sousa, Realisms p.97). Bront� does not allow Jane Eyre's Romantic/Gothic style to colour her descriptions though; she is concerned with social issues and does not allow the genres of Romance and the Gothic impinge overly. Page 1 of 4 ...read more.