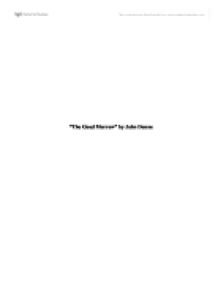 "The Good Morrow" by John Donne The poem "The Good Morrow", by John Donne is one of the poems, from our readings, that caught my interest. I was perplexed with the reference to the "Seven sleepers' den" (Line 4) imagery comparing the couple lying in bed. According to a popular legend, seven young Christians of Ephesus, in the second century, took refuge from Roman persecution in a cave, and miraculously slept for some two hundred years when the entrance of their cave was walled up by their pursuers 1. In the first stanza, the narrators devoted expression of love towards the female focus is full of charm and wit. Incidentally in line 6, "If ever any beauty I did see, / Which I desir'd, and got, 'twas but a dream of thee" illustrated the sincerity to which the speaker felt, because he spoke as if he knew he loved her even before he met her. ...read more.

When the two lovers come together to form one Donne's view strengthens the underlying idea of love when he writes "For love all love of other sights controls, / and makes one little room and everywhere" (Line 10-11). What attracted my attention was how Donne rationalized the speaker of this poem when he says, "Let us possess one world, each hath one, and is one" (Line 14). Donne characterized there feelings of one another such that these lovers don't have to fight over the world because these lovers are their own world. Now newly awakened from the dream that they previously considered to be reality in the first stanza, they emerged from the darkness of "the Seven Sleepers' den" (Line 4) and discover perfection, the perfection of their unity. Donne uses phrases like "Let sea-discoverers to new worlds have gone;" (Line 12), to suggest the idea that they are like a new continent found. ...read more.

Furthermore the narrator strengthens his integrity and the truthfulness of his feelings by assuring his love; with the plain heart which is the sincere heart, it does not contrive any crooked ways to play games to win her heart. This poem is much easier to interpret than many of the Shakespearian love poems, and expresses a complete love between two people, a symbol of perfection. Donne's ingenuity and wit has created a clever poem. His emotional expression is capable of stirring sentiment and unveiling feelings with his ingenious talent through the use of poetic symbols, and images. Donne has presented a couple emerging from there dreamlike reality and darkness to an immediate discovery of sexual love. His revolutionary ability during the written time period of this poem, bring upon feelings of envy, to write with such passion must have a degree of occurrence. By reading his poem it has brought an outlook upon love I've never visualized before. 1 http://eir.library.utoronto.ca/rpo/display/poem655.html ?? ?? ?? ?? 2 ...read more.