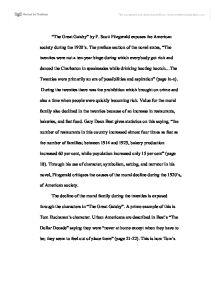 "The Great Gatsby" by F. Scott Fitzgerald exposes the American society during the 1920's. The preface section of the novel states, "The twenties were not a ten-year binge during which everybody got rich and danced the Charleston in speakeasies while drinking bootleg hootch...The Twenties were primarily an era of possibilities and aspiration" (page ix-x). During the twenties there was the prohibition which brought on crime and also a time when people were quickly becoming rich. Value for the moral family also declined in the twenties because of an increase in restaurants, bakeries, and fast food. Gary Dean Best gives statistics on this saying, "the number of restaurants in this country increased almost four times as fast as the number of families; between 1914 and 1925, bakery production increased 60 per cent, while population increased only 15 per cent" (page 18). Through his use of character, symbolism, setting, and narrator in his novel, Fitzgerald critiques the causes of the moral decline during the 1920's, of American society. The decline of the moral family during the twenties is exposed through the characters in "The Great Gatsby". A prime example of this is Tom Buchanan's character. Urban Americans are described in Best's "The Dollar Decade" saying they were "never at home except when they have to be; they seem to feel out of place there" (page 21-22). ...read more.

Fitzgerald also uses symbolism in his writing of "The Great Gatsby" to critique the moral decline of the 1920's. One repeated example is the sign in New York of Doctor T.J. Eckleburg.. His eyes peered down at everyone in the city as they drove by. It seems he sees all and knows all, reminding them of what they are doing wrong. The eyes are a reminder of the cheating and lying that is going on between Tom and Daisy's relationship. The novel states "Then as Doctor T.J. Eckleburg's faded eyes came into sight down the road I remembered Gatsby's caution about gasoline" (page129). He is a constant reminder to the group that what is going on is no longer a secret. Ernest H. Greuning describes New York as "Their outlook is eternally on stone or brick walls" (page 263). The outlook for the group is seen through the eyes on the sign of these "stone or brick walls". They know what they are doing is wrong and compromising their relationships, they know everyone else knows as well, but still keep it going. Another example of symbolism is the weather. Fitzgerald uses extremely hot weather in the scenes where Daisy and Gatsby's relationship is in the open, to intensify the heated argument between them all. ...read more.

He is always excited to be invited to his parties and to go places with him. He helps Gatsby restart his relationship with Daisy and in the end he is one of the only people to be at his funeral. He gives Gatsby one compliment throughout the novel, placing him higher than everyone else, but still goes on feeling disaprovement towards Gatsby. Nick is unreliable in his judgments of people, causing a reader to question truth and accuracy in what he has to say. Best's "The Dollar Decade" states "city life finds a new thrill every week for every member of the family" (page 20-21). This statement exposes Nick's unreliability as a social commentator of the 1920's. Tom and Daisy never bring their daughter to the city with them on their many trips. Also when they go to the city all they do is cheat on each other and drink. There are no thrills for them except for their own thrill of arguing over their problem relationships. Throughout his novel "The Great Gatsby" Fitzgerald critiques the causes of the moral decline during the twenties. He has done so through his use of character, symbolism, setting and narrator although we come to find the narrator is often viewed as unreliable. The twenties were a time of people getting rich, drinking too much and losing touch with their morals. Fitzgerald has exposed this life to us through "The Great Gatsby". ...read more.