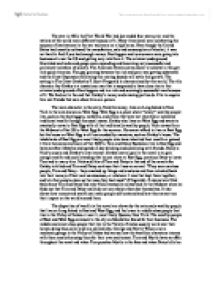 The year is 1922, the First World War had just ended four years prior and the nations of the world were different because of it. Many Americans were celebrating the success of involvement in the war and were on a high horse. Even though the United States had recently outlawed the manufacture, sale and consumption of alcohol, it was not hard to find if you had enough money. Bootleggers and rumrunners were going into business all over the US and getting very rich from it. The criminal underground flourished and mobs and gangs were expanding and becoming very successful and prominent members of society. The American Dream seems easier to achieve in this get-rich-quick America. The gap growing between the rich and poor was getting substantial and the Great Depression following this roaring decade will settle this growth. The setting in The Great Gatsby by F. Scott Fitzgerald is characterized by this world. The title character Jay Gatsby is a mysterious man that is suspected to have close ties to this criminal underground of bootleggers and is a rich and seemingly successful man because of it. ...read more.

It shows how Nick feels about Tom and Daisy and why Nick eventually moves back to the Midwest when he finds out that Tom and Daisy really do not care about others but themselves. It also shows how money and wealth can make people self-centered and how they cannot see their impact on the world around them. The disparities of wealth in this novel are shown by the extremely wealthy people that live on Long Island in East and West Egg, and the lower to middle class people that live in the Valley of Ashes or near it, most likely Queens, New York. The wealthy people of East and West Egg commute to the city on Manhattan Island for their business. The middle and lower class people that live in the Valley of Ashes usually work near their homes doing blue-collar and low-skilled jobs. George and Myrtle Wilson own a mechanic garage in the Valley of Ashes and we see how the wealthier characters interact with them mostly by using them for their own excitement. ...read more.

Most people at the parties suspect that Gatsby has all the alcohol and money because he has connections with or is a bootlegger, but no one seems to mind. This connection to bootleggers is probably the reason why Gatsby cannot make the jump up the social ladder and move to East Egg. In conclusion, The Great Gatsby's setting is very important to the story. The novel centers on the wealthier members of society and their luxurious and carefree attitudes from this wealth. Gatsby, Tom and Daisy are never mentioned in the novel to be at work or worrying about losing money because they are not working. They live a lifestyle, which is characterized by daily alcohol consumption, driving sports cars, driving to Manhattan Island for various reasons, or talking about their money while in their mansions. Nick is the only one in the story that shows remorse about Myrtle's death and seems like the only one not living in a worry-free bubble. After Gatsby's death only three people showed up to his funeral. It shows how many friends a suspected bootlegger really has and how many people really care about him and not his money and lavish parties. ...read more.