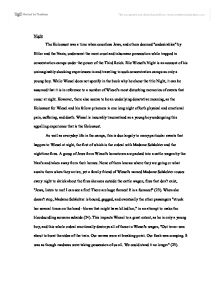 The Holocaust was a time when countless Jews, and others deemed &quot;undesirables&quot; by Hitler and the Nazis, underwent the most cruel and inhumane persecution while trapped in concentration camps under the power of the Third Reich. Elie Wiesel's Night is an ac

Night The Holocaust was a time when countless Jews, and others deemed "undesirables" by Hitler and the Nazis, underwent the most cruel and inhumane persecution while trapped in concentration camps under the power of the Third Reich. Elie Wiesel's Night is an account of his unimaginably shocking experiences in and traveling to such concentration camps as only a young boy. While Wiesel does not specify in the book why he chose the title Night, it can be assumed that it is in reference to a number of Wiesel's most disturbing memories of events that occur at night. However, there also seems to be an underlying denotative meaning, as the Holocaust for Wiesel and his fellow prisoners is one long night of both physical and emotional pain, suffering, and death. Wiesel is incurably traumatized as a young boy undergoing this appalling experience that is the Holocaust. As well as everyday life in the camps, this is due largely to many particular events that happen to Wiesel at night, the first of which is the ordeal with Madame Sch�chter and the nighttime fires. ...read more.

Our nerves were at breaking point. Our flesh was creeping. It was as though madness were taking possession of us all. We could stand it no longer" (23). Wiesel not only witnesses the nightly petrifying screams of a woman he knows well, but also the brutal beating of her by others who also know her well, and are in the same situation that she is. Experiencing an episode like this would, without a doubt, permanently scar anybody, needless to say a young boy in his early teens. This is Wiesel's first personal encounter with anything of this sort, the type of occurrence where fellow prisoners transform into animalistic savages who turn against each other, an occurrence which becomes all too familiar in Wiesel's near future. This is only one of many horrific, and unfortunately memorable, nighttime occurrence that Wiesel witnesses, most of which are equally terrible, if not more so. While Wiesel experiences a great number of such events that may have influenced him in his choice of the title Night, however, it also seems ...read more.

Felled him to the ground, stunned him with blows, the old man cried: 'Meir. Meir my boy! Don't you recognize me? I'm your father...you're hurting me...you're killing your father! I've got some bread...for you too...for you too....' He collapsed. His fist was still clenched around a small piece...the other one threw himself upon him and snatched it" (96). This is the type of inhuman behavior Wiesel witnesses that makes this experience in the camps one long night. Murders are being committed brutally and without reason. The darkest side of humanity is exposed, which is true both for the persecutors and the persecuted. Wiesel's experiences in the concentration camps resemble former perceptions of night in a number of ways, and are strung together to form one long, unimaginable nightmare. Wiesel depicts in a number of ways the horrible incidents he experienced at night, as well as his experience in the camps as a whole, which seemed like one long night. And although there were countless deaths in this one long and terrible night, and memories that will never be forgotten, dawn comes again for Wiesel and the many other survivors. ...read more.