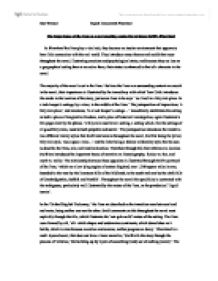 The importance of the Fens as a surrounding context in Graham Swift's Waterland In Waterland the Fens play a vital role, they become an insular environment that appears to have little connection with the real world. They introduce many themes and motifs that recur throughout the novel, illustrating emotions and psychological states, and because they act less as a geographical setting than as an active force, their status is enhanced to that of a character in the novel. The majority of the novel is set in the Fens. I believe the Fens as a surrounding context are crucial in the novel, their importance is illustrated by the immediacy with which Tom Crick introduces the reader to the location of the story, just seven lines in he says ' we lived in a fairy-tale place. In a lock-keeper's cottage, by a river, in the middle of the Fens.' The juxtaposition of imprecision, 'a fairy-tale place', and exactness, 'in a lock keeper's cottage...' immediately establishes the setting as both a place of imaginative freedom, and a place of historical investigation, again illustrated a few pages later by the phrase, 'a fairy-tale must have a setting, a setting which, like the settings of all good fairy-tales, must be both palpable and unreal.' The juxtaposition introduces the reader to two different literary styles that Swift interweaves throughout the novel, the first being the lyrical, fairy-tale style, 'once upon a time...' and the latter being a distinct evidentiary style that he uses to describe the Fens, eels, and land reclamation. Therefore through this first reference to location Swift has introduced the important theme of narrative vs. historiography, fiction vs. fact, and myth vs. reality. The relationship between these opposites is illustrated through Swift's portrayal of the Fens, 'which are a low-lying region of eastern England, over 1,200 square miles in area, bounded to the west by the limestone hills of the Midlands, to the south and east by the chalk hills of Cambridgeshire, Suffolk and Norfolk'. ...read more.

However, they all need and use their stories to keep the emptiness and nothingness at bay. 'And what are the Fens, which so imitate in their levelness the natural disposition of water, but a landscape which, of all landscapes, most approximates to Nothing?' Swift uses a capital 'N' to emphasize its importance as a term throughout the novel. The Fens are flat and low-lying, and much of the area lies below sea level. The landscape is monotonous, 'bare and empty,' observers often remark on the sense of isolation it produces. The nineteenth-century English poet John Clare wrote a descriptive poem called 'The Fens' which contains the following lines: 'Oer treeless fens of many miles Spring comes and goes and comes again And all is nakedness and fen... But all is level cold and dull And osier swamps with water full' This poem successfully illustrates the bare, void, and expansive nature of the Fens. 'To live in the Fens is to receive strong doses of reality. 'The great, flat monotony of reality; the wide empty space of reality. Melancholia and self-murder are not uncommon in the Fens. Heavy drinking, madness and sudden acts of violence are not uncommon.' Throughout the novel various characters are forced to take to drink in an attempt to stop the questioning, to dull the dullness, and to fill the 'intolerable emptiness'. On pages 113-114 the Fens become a composite metaphor for emotional and psychological states, a metaphor for the emptiness of human life, and the inadequacy of human knowledge. Jack Parr takes to drink because the 'terrible combination of emptiness and responsibility-was too much for him'. The 'intolerable geometry' of 'nothingness' is a metaphor for all the human fates and experiences throughout Waterland, uncertainty, failure, death, lack of meaning, and madness. Do the Fens represent reality? 'the thing about reality is that it is nothing, 'Reality is uneventfulness, vacancy, flatness. ...read more.

A very important symbol that runs continuously throughout Waterland is the River Ouse. All the traditional symbolism is present in Swift's use of the river: i.e. the flow of time, endless progression, and the force of nature, but Swift also gives the river a human element (see earlier). The river is a constant element; history passes it by while it just 'flows on, oozes on, just like before.' The Ouse is also a constant element in the narrative; it runs throughout the novel connecting various different parts and is the central symbol that gives Waterland its cyclical nature.This circularity is well illustrated when Swift gives a description of the water-cycle, 'so that while the Ouse flows to sea, it flows, in reality, like all rivers, only back to itself, to its own source; and that impression that a river only moves one way is an illusion.' Swift uses a convoluted narrative that almost ebbs and flows; the non-linear style is carried in broken crosscurrents of self-interrupted thoughts, explanations, and reasons. Tom Crick uses water ridden analogies all the way through the novel, one of the most obvious ones being the description of history, 'It goes in two directions at once. It goes backwards as it goes forwards. It loops. It takes detours...marching unswervingly into the future.' Waterland involves the story of two families, the Cricks and the Atkinsons, water people vs. capitalist brewers, David Malcolm in his book 'Understanding Graham Swift' argues that this serves as a 'paradigm for England during the Industrial revolution, technology and capitalism overtaking the life and land of the Fen people: figuratively connecting Swift's ideas of progress to the movement of the river. Crick's narrative is an attempt to reclaim/retell the displaced history of his people. The Fens are very important throughout the novel, they advance the plot and become this platform from which stories emerge, they lie just below the surface of the narrative, attribute human and sexual characteristics, and most significantly they allow the plot to advance more rapidly. ...read more.