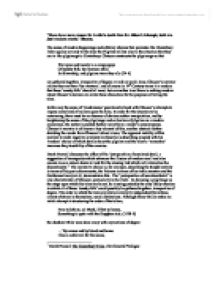 The Knight's Tale and the Miller's Tale. There is no more reason for Arcites death than for Alisons triumph, both are just random events. Discuss.

'There is no more reason for Arcite's death than for Alison's triumph, both are just random events.' Discuss. The sense of random happenings and arbitrary choices that pervades The Canterbury Tales applies not only to the tales the Pilgrims tell but also to the situation that they are in- the pilgrimage to Canterbury. Chaucer constructs the pilgrimage so that Wel nyne and twenty in a compaignye Of sundry folk, by aventure yfalle In felaweship, and pilgrims were they alle (24-6) are gathered together, irrespective of degree or rank or social class. Chaucer's narrator claims they are there 'by aventure', and of course in 14th Century terms it is random that these 'sondry folk' should all meet, but on another level there is nothing random about Chaucer's decision to create these characters for the purposes of telling the tales. In this way the sense of 'randomness' goes hand in hand with Chaucer's attempts to impose some kind of realism upon the tales. In order for the situation to be convincing, there must be an absence of obvious author manipulation, and by heightening the sense of the pilgrimage and collection of pilgrims as a random occurrence, the author is pushed further away from a reader's consciousness. Chaucer's narrator is of course a key element of this, another obstacle further shielding the reader from Chaucer's direct views. The apparent inability of this narrator to make negative comment on those he is describing coupled with his 'random' choice of which details about the pilgrims and the tales to 'remember' increases the plausibility of the exercise. ...read more.

In the pilgrims this is demonstrated by the fact that they are generally identified only by their profession. Indeed, this is the point: much of the humour comes from the shared knowledge between author and reader about what is expected of people of the profession to which the pilgrim belongs. The Tales themselves also show this. In The Miller's Tale for example, we can see from the outset that John is a stereotypical jealous old husband with Alison the adulterous young wife and Nicholas the lecherous young man. It is not difficult to predict what will occur. The same is true of Januarie, May and Damian in The Merchant's Tale. In some ways then, what happens in The Tales is not at all random: the tales follow a set pattern. This interplay of randomness with predictability is particularly interesting as Chaucer plays with our expectations. In The Knight's Tale however, Chaucer implies that perhaps the fates of Palamon and Arcite are not just random, but due to the influence of some kind of higher forces. There is a definite sense of a lack of free will in the tale, but whether this stems from the movements of the planets or the actions of classical deities, or whether it has to do with this sense of the characters as stereotypes acting out previously dictated modes of behaviour is difficult to tell. The characters themselves make frequent references to 'Fortunes wheel' and the 'crueel goddes': 'Thanked be Fortune and hire false wheel' (925) ...read more.

Another aspect to consider is Chaucer's shifts between fantasy and realism. We have already seen how the 'random recall' of the narrator increases the realistic sense of the pilgrimage. However, there are several practical details such as, as one critic has pointed out, the fact the pilgrims never stop for the night anywhere or have meals. Even the practicalities of how everyone could hear each tale is ignored. Chaucer doesn't deal with every small detail, unlike, for example, Bocaccio in his Decameron. Similarly, in the description of the Knight in the General Prologue, his conquests seem initially convincing but it is soon clear that they are just not feasible. In the same way he moves between describing the pilgrims as embodiments of their profession to revealing small personal details that mark them as individuals. Interestingly, the fact that there is an element of randomness to the outcomes of these characters' lives can add to both the real and the fictional sides of their characterisation. As purely fictional types with little to distinguish them, the randomness of what happens to them simply furthers our apathetic attitude to them, such as is the case with Palamon and Arcite. But in the case of Alison and Nicholas where one co-conspirator is punished and the other escapes, we are reminded that in literary worlds, as in the real one, life isn't always fair. 1 Derek Pearsall The Canterbury Tales, The General Prologue 2 Derek Pearsall, The Canterbury Tales, The Knight's Tale 3 Derek Pearsall, The Canterbury Tales, The Knight's Tale 4 Derek Pearsall, The Canterbury Tales, Comic Tales and Fables- The Miller's Tale, p.178 5 As above, p.179 ...read more.