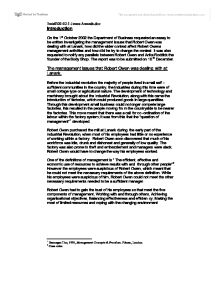 The management issues that Robert Owen was dealing with at Lanark

Introduction On the 1st October 2002 the Department of Business requested an essay to be written investigating the management issues that Robert Owen was dealing with at Lanark, how did the wider context affect Robert Owens management activities and how did he try to change the context. It was also requested to notify any parallels between Robert Owen and Anita Roddick the founder of the Body Shop. The report was to be submitted on 10th December. The management issues that Robert Owen was dealing with at Lanark. Before the Industrial revolution the majority of people lived in small self-sufficient communities in the country, the industries during this time were of small cottage type or agricultural nature. The development of technology and machinery brought about the Industrial Revolution, along with this came the introduction of factories, which could produced goods in large quantities. Through this development small business could no longer compete large factories, this resulted in the people moving from the countryside to be nearer the factories. This move meant that there was a call for co-ordination of the labour within the factory system; it was from this that the "question of management"1 developed. Robert Owen purchased the mill at Lanark during the early part of the Industrial Revolution, when most of his employees had little or no experience of working within a factory. ...read more.

Soon after Robert Owen arrived at Lanark he used his contacts in Glasgow to argue the issues of reform on education and the effect that the industrial revolution was having on working class people, he also highlighted child labour. As a result of his opinions he came against tough resistance from other mill owners on child labour, eventually a weaker version became law. The Parallels between Robert Owen and Anita Roddick. Robert Owen did have experience within the business he knew the 'rules', however along with the fact that he was a philanthropist and his own beliefs he choose not to follow the 'rules'. Anita on the other hand did not have any experience within business, but she also choose to ignore the 'rules', they both came across much opposition and criticisms from people were in the business. In many ways Anita and Robert shared the same views, they both had a general concern for people who were suffering from some kind of poverty. They both invested money and time into these issues, which gives them both a common interest in the management theory of Human Relations. Robert improved working conditions because he thought that this would increase productivity and profits, this was later proven by the hawthorn studies. ...read more.

John Adair investigated in to the theory of leadership and concluded that three needs have to be met in order to create a balance of satisfaction between all the members. The three needs consisted of the individual needs, the groups needs and the task needs. Robert Owen and Anita Roddick used the three in trying to produce a satisfactory solution of both them and their workforce. They both also used High structure and high consideration, which is a combination of the leader, striving to achieve a productive balance between getting the task done and maintaining a friendly group. Robert Owen and Anita Roddick were both a product of self help, in different time eras, however they shared many similar opinions and they both tried to resolve some of the issues that they had concern for. They were both business people, but they were not in business purely for the money, they both used their positions to try and change issues. Robert Owen and Anita Roddick both tried to help people who were suffering from poverty. Robert did this by improving the conditions at Lanark, while Anita help third world countries. They both drew attention to the social problem of the country and motivated people by taking this approach, they both stood up for changes to be made. Considering the differences in time between them they both used similar methods of management to encourage change. ...read more.