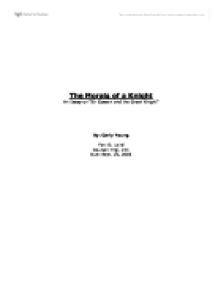 The Morals of a Knight, An Essay on &quot;Sir Gawain and the Green Knight&quot;.

1195-1202) Gawain is then made to decide between being chivalrous or committing adultery. Never the less he returns the three kisses that were given to him by the lady and therefore passes the first test. However, even though Gawain has passed this test a morality conflict has developed within him, "revealing that his knightly edicts and supposed courtliness are of no use in a situation of adversity" (2). Gawain then approaches a second conflict between self-preservation and honor, when he is presented with the third test. He has begun to worry about his life, and the more he thinks of it being in the hands of the Green Knight he wonders what he will do to help himself. When he at first is offered a gold ring by Morgan le Fay he denies it, "Before God, good lady, I forgo all gifts" (ll. 1822). Then Gawain is presented with Morgan le Fay's girdle "I shall give you my girdle; you gain less thereby" (ll.1829) ...read more.

by not giving up the girdle. Gawain however confesses his sins to the Green Knight and begs to be pardoned, Bertilak states to Gawain "your failings made known" (ll. 2391); thereafter he voluntarily wears the girdle as a symbol of his sin. Gawain sees how covetousness has over come him, and he allowed for the power of wealth and possessions to become more important than honor, and nobility. Gawain comes to acknowledge the problematic nature of courtly ideals. "Due to him repenting his sin however in such an honorable manner his one imprudence in the poem actually ends up being an example of his basic goodness" (3). In conclusion, covetousness has played a huge theme in Sir Gawain's actions, and therefore lessons which are learned through the poem. The idea of a Knight being noble, honorable and chivalrous is societies applied pressures and conformations, thus the importance of upholding these traditions is very important. We see the commitment made by Gawain when he confesses his sins, "Be hold there my falsehood, ill hap betide it!" (ll. 2378), and thus he has learned to not let covetousness take over his courtly obligations. ...read more.