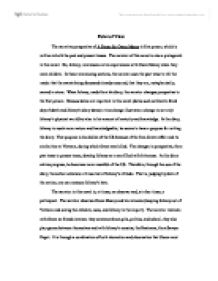 The narrative perspective of A Prayer for Owen Meany is first person, which is written in both the

Point of View The narrative perspective of A Prayer for Owen Meany is first person, which is written in both the past and present tenses. The narrator of this novel is also a protagonist in this novel. He, Johnny, reminisces on his experiences with Owen Meany when they were children. In these reminiscing sections, the narrator uses the past tense to tell the reader that the events being discussed already occurred, that they are, metaphorically, carved in stone. ...read more.

In the diary, Johnny is much more mature and knowledgeable; he seems to have a purpose for writing the diary. That purpose is his dislike of the US because of the Iran-Contra affair and its similarities to Vietnam, during which Owen was killed. The changes in perspective, from past tense to present tense, develop Johnny as a man filled with bitterness. ...read more.

The narrator observes Owen Meany and his miracles (keeping Johnny out of Vietnam and saving the children, nuns, and Johnny in the airport). The narrator interacts with Owen as friends interact; they converse about girls, politics, and school, they also play games between themselves and with Johnny's cousins, the Eastmans, from Sawyer Depot. It is through a combination of both interaction and observation that Owen most persuades Johnny to become a Christian, and as Johnny says, "[Owen] is the reason I believe in God; I am a Christian because of Owen Meany" (13, 1). ...read more.