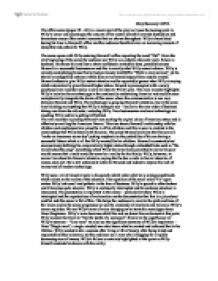 The office scene (pages 59 - 66) is a crucial part of the play as it sees the turning point in Willy's career and encourages the last part of his mental downfall towards destruction and dramatises many of the central concerns that are shown throughout.

The office scene (pages 59 - 66) is a crucial part of the play as it sees the turning point in Willy's career and encourages the last part of his mental downfall towards destruction and dramatises many of the central concerns that are shown throughout. Willy is humiliated during his time in Howard's office and the audience therefore have an increasing amount of sympathy and pathos for Willy. The scene opens with Willy entering Howard's office repeating the word "Pst!". From the very beginning of the scene the audience see Willy as a pathetic character and a failure in business. He shows his inability to show confidence around his boss, possibly because Howard is a successful businessman and this is exactly what Willy cannot achieve. Willy is already contradicting himself as he had previously told Biff to "Walk in very serious", yet he shows an undignified entrance which does not command respect from anyone around. Howard refuses to give Willy instant attention and he repeatedly ignores what Willy is saying which automatically gives Howard higher status. Howard is preoccupied with a newly purchased wire recorder and so is slow to listen to Willy's plea. This wire recorder highlights Willy's isolation from technology in the continually modernising America and could be seen metaphorically alongside the drama of this scene where the communication is one way between Howard and Willy. ...read more.

We see Willy's tone of voice changing as he starts his monologue about Dave Singleman. Willy's voice becomes child-like and we detect his excitement at this point. Willy wanted like Dave to "Die the death of a salesman". Similar to the significance of Willy's surname - "Low-man" we also see the significant surname of Willy's inspiration - Dave "Single-man", a single-minded man who knew what he wanted and achieved that in his lifetime. Willy wanted to die a success after living a life of luxury, after being loved and respected by other salesman, yet the audience see a man who is begging for a rapidly decreasing sum of money. Willy's failure is certainly highlighted at this point as Willy himself contrasts his dream with his reality. Again during this scene we see the inconsistency of Willy's opinions as he yet again contradicts himself after telling Biff "If anything falls off the desk...don't you pick it up. They have office boys for that" and then just a few pages later the stage directions tell us that Howard "looks for his lighter, Willy has picked it up and gives it to him". Willy has reduced himself to the status of an office boy during this short period of time in Howard's office. Willy knows his status but makes it clear by his pitiful entrance into the scene and then the shrinking and erosion of his personality and pride during it. ...read more.

Miller is now showing in unambiguous terms, the worthlessness of Willy to Howard. We see the clash between Howard's ruthless but realistic nature, and Willy's illusions and dreams of success and this causes dramatic tension and conflict visible to the audience. There is a lot of emphasis placed on Howard's corporate chair towards the conclusion of this scene and the lighting changes to highlight the chair as this is a symbol of the business world that Willy never quite fitted into. Willy's mind spends only a very short time in the past during this scene and briefly sees Frank, Howard's father. It is the sound of Howard's son on the wire recorder which brings Willy back to the present and this could represent ironically how Willy never wakes up to the fact that modern technology, younger salesman and the American Dream have taken over from him and eventually kill him. The conclusion of the scene is Howard's line "Pull yourself together, kid, there's people outside". The use of the word "kid" shows Howard patronising Willy still as Howards sees him as nothing but a kid due to his lack of success. This scene shows us the business world at its most ruthless and we see Willy swallowed by a dream that can no longer become a reality for him. Mary Sweeney L6PCL ...read more.