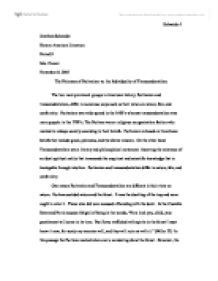 The beauty he sees is breathtaking and everlasting. For these reasons, Puritanism and Transcendentalism philosophy on nature are completely diverse. Furthermore, Puritanist and Transcendentalist outlook on fate diverge immensely. Puritans believed in predestination, the idea that every human had a role in life. Their conduit was part of Gods printed record for them to follow. What they are is what they are and nothing could change that. If one was born a slum on the streets then that was what God wanted you to be. Puritans led their lives in hope of salvation through their fate: It was impossible, of course, to be entirely confident of one's eternal fate, but that edge of uncertainty only made believers redouble their efforts to purify their own lives and society as a whole. And nothing was more important than gaining greater reassurance of salvation. (Puritanism) As stated in the passage the puritans of the time lived their lives of pureness, though sometimes uncertain of their fate, to insure total salvation. ...read more.

Each looked and dressed alike"(Puritanism). Quite the opposite, transcendentalists believe in individuality. Become what you want to be, do what you want to do, and worship where you please. An example of this can be seen in David Thoreau writing Walden: "If a man does not keep pace with his companions, perhaps it is because he hears a different drummer. Let him step to the music which he hears, however measure or far away. It is not important that he should mature as soon as an apple tree or an oak." (Prentice) Thoreau was emphasizing the importance of individuality, by going to a beat of a different drummer. Provided this, you can see the ideas of conformity greatly differ from these two groups. The differences in which puritans and transcendentals see things are more than immense. You could say these groups have almost nothing in common with their ideological outlooks. I have to concur with the thoughts of the Transcendentalists as they go with my personality greatly. Transcendentalism and Puritanism, being Americas two most famous groups, diverge on there views of nature, fate, and conformity. ...read more.