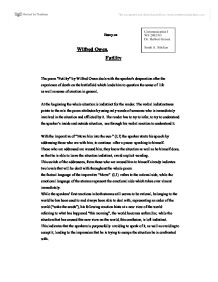 The poem &quot;Futility&quot; by Wilfred Owen deals with the speaker's desperation after the experience of death on the battlefield which leads him to question the sense of life as well as sense of creation in general.

Essay on Wilfred Owen, Futility The poem "Futility" by Wilfred Owen deals with the speaker's desperation after the experience of death on the battlefield which leads him to question the sense of life as well as sense of creation in general. At the beginning the whole situation is indistinct for the reader. The verbal indistinctness points to the role the poem attributes by using only words of someone who is immediately involved in the situation and afflicted by it. The reader has to try to infer, to try to understand the speaker's inside and outside situation, see through his verbal reaction to understand it. With the imperative of "Move him into the sun-" (I,1) the speaker starts his speech by addressing those who are with him, to continue -after a pause- speaking to himself. Those who are addressed are around him, they know the situation as well as he himself does, so that he is able to leave the situation indistinct, avoid explicit wording. This switch of the addressees, from those who are around him to himself already indicates two levels that will be dealt with throughout the whole poem: the factual language of the imperative "Move" (I,1) ...read more.

This desperate attempt marks the strongest contrast to reality and shows how the speaker fails to understand what has happened and turns to the sun instead. The change of rhythm in line 5 shows the return to the present situation: the situation seems to enter the speaker's mind, also indicated by expressions like "this morning" (I,5) or "this snow" (I,5), which shows that he suddenly sees what he is confronted with, but also suddenly seems to understand what it means: the circle of life and growth which hopefully began on "fields unsown", now ends with snow. The speaker still tries to reject it by avoiding explicit words but nevertheless it has entered his mind. He is now isolated, realises and slowly finds his way back to reality. He stops denying, indicated by "might", showing that only a weak hope is left. The second stanza starts with a direct address of the listeners- the encouragement to "Think" (II,1), followed again by a pause, after which the speaker once again recalls the past (II, 2-5). But this time, the speaker turns to the universal proofs of the sun's power in creation of life. ...read more.

viewing at creation in general in the light of the situation: the question of the reason for creation in general after the experience of the taking and wasting of life in war and the futile attempts in the first stanza to move the life giving power to change this. While in the first stanza, the speaker has been trying to delude himself to the belief in the power of the sun, as well as to an escape to the memories of the past, the second stanza mirrors the futility of his attempts. He loses control as well as the ability to make sense of what has happened. He realises that the past cannot have any impact on the present. The three emotional questions revel his growing doubts as well as his increasing contempt of creation which seems to have been created for destruction only. After the experience of the "futility" of all of his attempts, the final outcry seems to be a culmination: Since war wilfully interrupts the circle of constant natural renewal and re- awakening and is able to enter the circle at any point, it makes "toil" of the creator, which raises the question of reason for creation in general, which seems to be "futile" anyway. ...read more.