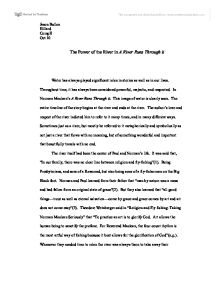 The Power of the River in A River Runs Through it.

The Power of the River in A River Runs Through it Water has always played significant roles in stories as well as in our lives. Throughout time, it has always been considered powerful, majestic, and respected. In Norman Maclean's A River Runs Through it. This image of water is clearly seen. The entire timeline of the story begins at the river and ends at the river. The author's love and respect of the river indicted him to refer to it many times, and in many different ways. Sometimes just as a river, but mostly he referred to it metaphorically and symbolically as not just a river that flows with no meaning, but of something wonderful and important that beautifully travels with no end. The river itself had been the center of Paul and Norman's life. It was said that, "In our family, there was no clear line between religion and fly-fishing"(1). Being Presbyterians, and sons of a Reverend, but also being sons of a fly-fisherman on the Big Black foot. ...read more.

Metaphorically, the river was included in just about every aspect of the book. A river can be looked at as the flow of life; it always goes on no matter what. Eventually all things merge into one, and a river runs through it. The river was cut by the world's great flood and runs over rocks from the basement of time on some of the rocks are timeless raindrops. Under the rocks are the words and some of the words are theirs (113). This powerful statement describes how Norman sees the river. He does not see it as just a river or just a place to fish. The Big Blackfoot is as much a part of his life as anything else. He has a life full of memories that can only be shared with the river and once he is gone. Those memories will become more words under the rocks. The river also can be looked at as Norman's struggles during his life, or for that matter, anyone's struggles during life. ...read more.

The river can also symbolize perfection. When the story began, the river was there, recording everything that it saw and writing it under the rocks. And when the story ended, the river was still there, just as before and as powerful as ever. Almost seemingly avoiding the test of time. Because of the climatic events that the river has been involved in Norman's live. It is clear to see why it would become such an influence in his works and it is also quite easy to see why he would be "Haunted by waters"(113). The river contains all of his history and knows everything about him. From the time he was a little kid throwing rocks into the water up to his last days as an old man fishing the big waters alone. The river was there, storing everything under the waves. Such an incredible display of power can hardly be imagined. The River is so powerful that the test of time barely affects it. It will always be there driving on into the future, and providing a sanctuary for many more Norman Maclean's to come. Jason Bullen Hillard CompII Oct 10 ...read more.