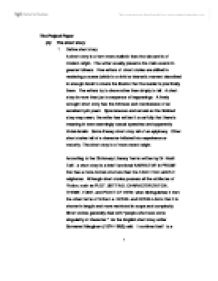 The Project Paper - The short story.

The Project Paper (A) The short story 1. Define short story A short story is a form more realistic than the tale and is of modern origin. The writer usually presents the main events in greater fullness. Fine writers of short stories are skilled in rendering a scene (which is a vivid or dramatic moment described in enough detail to create the illusion that the reader is practically there. The writers try to show rather than simply to tell. A short story is more than just a sequence of happenings. A finely wrought short story has the richness and conciseness of an excellent lyric poem. Spontaneous and natural as the finished story may seem, the writer has written it so artfully that there is meaning in even seemingly casual speeches and apparently trivial details. Some literary short story tell of an epiphany. Other short stories tell of a character initiated into experience or maturity. The short story is of more recent origin. According to the Dictionary Literary Terms written by Dr Rosli Talif, a short story is a brief functional NARRATIVE in PROSE that has a more formal structure than the TALE< from which it originates. Although short stories possess all the attributes of Fiction, such as PLOT, SETTING, CHARACTERIZATION, THEME, TONE, and POINT OF VIEW, what distinguishes it from the other forms of fiction i.e. NOVEL and NOVELLAA is that it is shorter in length and more restricted in scope and complexity. Short stories generally deal with "people who have some singularity of character." As the English short story writer Somerset Maugham (1874-1965) said. It confines itself to a 1 single major character(although, sometimes it may have more than one major character) at a moment of crisis, either of spirit or of circumstances. A short story aims to provide a "slice of life story" (sometimes , however, it may also incorporate certain fantastic and fabulous elements), and is generally structured in such a way that it creates a "unified effect." ...read more.

Although he kept on writing, readers have generally preferred his earlier poems. The Prelude, a long poem-memoir completed in 1805, did not appear until after the poet's death. One of the most original of writers, Wordsworth---especially for his poems of nature and simple rustics---occupiesa popular place in English poetry, much like that of Robert Frost in America. 13 William Wordsworth's Major Works: 1. A Slumber did my spirit seal 2. The World is too much with us 3. I Wondered Lonely as a Cloud 4. My Heart Leaps up when I behold 5. Mutability 6. Composed Upon Westminster Bridge (c) Wallace Stevens Wallace Stevens (1879-1955) was born in Reading, Pennsylvania; his father was a successful lawyer; his mother, a former schoolteacher. As a special student at Harvard Advocate, but he did not want a liberal arts degree. Instead, he became a lawyer in New York City, and up 1916 joined the legal staff of the Hartford Accident and Indemnity Company. In 1936 he was elected a vice-president. Stevens, who would write poems in his head while walking to work and then dictate them to his secretary, was a leading expert on surety claims. Once asked how he was able to combine poetry and insurance, he replied that the two occupations had an element in common: "calculated risk." As a young man in New York, Stevens made lasting friendships with poets Marianne Moore and William Carlos Williams, but he did not seek literary society. Though his poems are full of references to Europe and remote places, his only travels were annual vacation trips to Key West. He printed his early poems in Poetry magazine, but did not publish a book until Harmonium appeared in 1923, when he was forty-four. Living quietly in Hartford, Connecticut, Stevens sought to discover order in a chaotic world with his subtle and exotic imagination. His critical essays, collected in The Necessary Angel (1951), and his Letters (1966), edited by his daughter Holly Stevens, reveal a penetrating, philosophic mind. ...read more.

How does this quality affect our perceptions of the characters. Describe how Mommy and Daddy treat Grandma? How do they speak to Grandma? Do Mommy and Daddy bring Grandma to the beach to die? What aspects of the play seem comic? What aspects appear unpleasant? Events: In the exposition, Mommy and Daddy bring Grandma to the beach and dump her in a sandbox. The way the story is written is very 27 unexpected. It is humourous which makes people laugh. The fact that grandma is ill-treated by Mommy and Daddy is very unpleasant. Mommy, being brought up by Grandma with difficulty, yet Grandma is being dumped by Mommy and Daddy. The music in the play serves as a comic relief. The Mommy is the decision maker whereas the Daddy just follow what the Mommy tells him to do. The climax of the play is that Grandma meets the young man . Grandma, at first she could't understand what the young man is there for. Later , the moment the Grandma dies, the young man told Grandma that he is "the Angel of Death". He comes all the way to welcome Grandma. Tone: Selfishness of Mommy to let Grandma to die in a sandbox in the beach. The ungrateful daughter who ill-treated her own Mommy. Central Theme: The Sandbox pokes absurd fun at middle -class family values by satirizing the hypocrisy and indifference family members exhibits toward one another. Symbols: Sandbox is the symbolic of bad treatment of human being as compared to animal like cat. Evaluation: The Sandbox seems simultaneously both comic and unpleasant. The basic dramatic premise of Mommy and Daddy bringing Grandma to the beach to fie is rather nasty, but the way the writer presents it , as in the couple unceremoniously dumping the old gal in the sandbox , is deliberately funny. The theater of the Absurd characteristically portrays the darkest existential material in slap-stick comic terms. We laugh, be part of what we laugh at is the absurdity and ephemerality of our own existence. 28 ...read more.