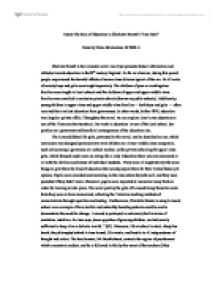 The Role of Education in Charlotte Bront(TM)s Jane Eyre

Essay-The Role of Education in Charlotte Bront�'s "Jane Eyre" Done by Diana Griciuviene Af 0606 U Charlote Bront� in her romantic novel Jane Eyre presents factual information and attitudes toward education in the19th century England. As far as is known, during this period people experienced the harmful effects of severe class division typical of the era. At all levels of society boys and girls were taught separately. The children of poor or workingclass families were taught in local schools and the children of upper and upper-middle-class families were enrolled in exclusive private schools (known as public schools). Additionaly, young children in upper-class and upper-middle-class families - both boys and girls - often received their earliest education from governesses. In other words, before 1870, education was largely a private affair. Throughout the novel, we can explore Jane's own education at one of the Victorian charity school , her work in education at one of the local school, her position as a governess and beneficial consequences of the education also. The Lowood School for girls, portrayed in this novel, can be described as one, which curriculum was designed particularly to train children to a lower-middle class occupation, such as becoming a governess or a school teacher, unlike private schooling for upper-class girls, which focused much more on acting like a lady. ...read more.

In 19th century England, being a governess was one of the few occupations considered suitable for an unmarried middle-class woman. In this novel Jane Eyre secures a job as governess to the lovely French girl named Ad�le . Jane Eyre taught her French, music, drawing and other subjects. Lessons came from what Jane had learned from Lowood School. Furthermore, as a governess she rarely received any formal instruction regarding teaching or curriculum. Even within the schoolroom, Jane Eyre and Adele were utterly alone. Despite governess' circumstancing not receive many teaching resources, she gives a good education to Adele. Jane tries to assess Adele's individual talents and subjects where she struggles and teaches her accordingly. Nevertheless, the reader can also discover that other children were not encouraged to respect their governess and so discipline was sometimes impossible; as Amy Eshton says "Louisa and I used to quiz our governess too; ...we might do what we pleased-......she would give us anything we asked for"(177 ). Jane Eyre's position as a country teacher, allows the reader to discover the educational situation at local schools of the Victorian Era. After discovering Jane's true identity, her distant relative St. John invites Jane to work at Morton's local school: "In the village school I found you could perform well, punctually, uprightly, labour uncongenial to your habits and inclinations; you could win while you controlled. ...read more.

She also learns from looking at the pictures, by what goes on and lead her to believe mysterious things go on. Later, education was a ticket to break free from the expectations of a lower-class person in England during the Victorian period. Obviously, Jane herself spends most of her life, as portrayed in the novel, in the English education system, first as student and later as teacher. Actually, one of the most famous Victorian novelists, Charlotte Bronte, focused in a larger part of her novel on the brutality and consequences of Victorian education. The novel transports readers into the Victorian time education system and allow them to see how ineffective, discriminatory Lowood school for girls was. Many teachers of Lowood School were strict disciplinarians and corporeal punishment was considered acceptable. Students were punished for varying offenses. Moreover, individual learning differences were largely ignored in favor of forcing upon students the monotonous and rigorous task of memorizing a huge amount of facts. Moover , Bronte's Jane Eyre portrays the governess' situation and presents education for poor pupil at school in Morton . In fact, the reader also can find out there that, without education nothing was expected of women in the Ninetheens century England. A narrowness of education resulted in narrowness of experience, outlook, and life. Bront� Charlotte, Jane Eyre.Penguin Popular Classic,1994. ...read more.