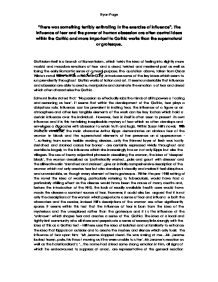 The Role of Fear and Obsession on Gothic Literature. It seems within these texts that a sense of Gothic, with regard to the influence and obsession of the characters, comes not so much from the conventional fear of the supernatural and the mystical but m

"There was something terribly enthralling in the exercise of influence". The influence of fear and the power of human obsession are often central ideas within the Gothic and more important to Gothic works than the supernatural or grotesque. Gothicism itself is a branch of Romanticism, which twists the idea of feeling into slightly more morbid and macabre emotions of fear and a dead, twisted and medieval past as well as losing the early Romantic sense of a moral purpose. The quotation above, taken from Oscar Wilde's novel The Picture of Dorian Gray, introduces some of the key ideas which seem to run prevalently throughout Gothic works of fiction and art. It seems undeniable that influence and obsession are able to create, manipulate and dominate the emotions of fear and dread which often characterise the Gothic. Edmund Burke stated that: 'No passion so effectually robs the minds of all its powers of acting and reasoning as fear'. It seems that within the development of the Gothic, fear plays a ubiquitous role. Influence can be prevalent in inciting fear, the influence of a figure or an atmosphere and other less tangible elements of the work can be key factors which hold a certain influence over the individual. However, fear in itself is often seen to present its own influence and it is this tantalizing inexplicable mystery of fear which so often develops and envelopes a character with obsession to retain truth and logic. Within Susan Hill's novel, The Woman in Black, the main character Arthur Kipps demonstrates an obvious fear of the woman in black and the supernatural elements of her presence and appearance - '...suffering from some terrible wasting disease...only the thinnest layer of flesh was tautly stretched and strained across her bones'- are certainly expressed vividly throughout and contribute largely to the influence which she increasingly has on not only Kipps but also the villagers. ...read more.

However, far from this fear acting as a constant reminder of morality, the fear also wields a strongly negative influence through the extreme excitement and passion of sin. This effectively reflects the nature of the mysterious fear within The Woman in Black and 'The Thorn' as fear itself is perhaps the greatest mystery and so the excitement for Dorian Gray lies in testing and breaking the mysteries of sin and debauchery, all characteristic elements of the Gothic. The link between influence and obsession within The Picture of Dorian Gray is strong; it can easily be seen that obsession is merely the product of strong influence, the degradation into the fervent compulsion of obsession from unavoidable influence - 'He grew more and more enamoured of his own beauty, more and more interested in the corruption of his own soul...The more he knew, the more he desired to know. He had mad hungers that grew more ravenous as he fed them'. This influence is seen largely within Dorian's own fear rather than the hideousness of the portrait. This path from influence upon a character to their obsession can also be seen within The Woman in Black where the influence of the fear upon Arthur Kipps develops into his obsession with delving into and uncovering the mystery: 'the woman in black...affected us both as deeply as any other experience we had undergone in our lives..."I must face it out...Such things one must face." And even as I spoke I felt a new determination arise within me...I had fallen under some sort of spell of the kind that certain places exude and it drew me, my imaginings, my longings, my curiosity, my whole spirit...'. Aside from the influence which fear itself can present, within these three texts and indeed many other texts which present elements of the Gothic, the influential and obsessive power of the supernatural can be seen. ...read more.

The symmetry of the rhyme and the ease and natural nature of the rhythm seem to reflect the madness within Porphyria's lover despite his reposed and calm fa�ade: 'surprise made my heart swell, and still it grew'. The madness of the man is what has influenced his action yet it was also the perfection of the scene and the obsession with Porphyria and her love '...she was mine, mine, fair...I...strangled her...'. This obsession, a perfectly human one, yet insane, is what is most chilling about Browning's poem and indeed strongly reflects the sense of human influence within The Picture of Dorian Gray. Overall it is clear that influence, and the natural development of it into obsession, is a key feature which defines and creates the Gothic. Influence can abound in many forms within Gothic texts such as the natural influence of fear itself upon the victim and the unnatural fear of something supernatural; however, that which seems to create the element of 'spine-tingling' and Gothic is bred mainly in something far more base and real than ghosts or curses. It is the possible which shocks and chills more than the unreal. In the same way that a terrible thought or feeling can be far more fearful than the unimaginable presence of something as otherworldly and unlikely as a curse, so too is Gothic literature defined by the baseness and instinct of humanity. Within these texts, particularly 'Porphyria's Lover', man himself, has more power in shaping his obsessions than would ordinarily be thought and the fact that emotions, thoughts and feelings can become so twisted and amoral is more greatly unsettling than anything incomprehensible. Human degradation is a cold reality and one which many strive to cover up yet when the mysteries of the human psyche are uncovered, perhaps because of a fearful obsession, the chilling nature of man is overturned. 1 Kirkham, Michael. Inexperience and Experience in Wordsworth's "The Thorn". 2 G�rard,Albert; quoting from J . F. Danby, The Simple Wordsworth: Studies in the Poems, 1797-1807. 3 The Scots Observer, 5 July 1890 ?? ?? ?? ?? Ryan Page ...read more.