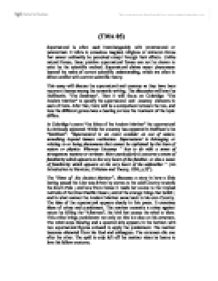 The supernatural in Coleridge's &quot;The Rime of the Ancient mariner&quot; &amp; the uncanny in Hoffman's the &quot;Sandman&quot;

(TMA 05) Supernatural is often used interchangeably with preternatural or paranormal. It refers to conscious magical, religious or unknown forces that cannot ordinarily be perceived except through their effects. Unlike natural forces, these putative supernatural forces can not be shown to exist by the scientific method. Supernatural claims assert phenomena beyond the realm of current scientific understanding, which are often in direct conflict with current scientific theory. This essay will discuss the supernatural and uncanny as they have been recurrent themes among the romantic writing. The discussion will start by Hoffman's: "The Sandman". Then it will focus on Coleridge: "The Ancient Mariner" to specify the supernatural and uncanny elements in each of them. After that, there will be a comparison between the two, and how the different genres have a bearing on how the treatment of the topic differs. In Coleridge's poem "the Rime of the Ancient Mariner" the supernatural is obviously appeared. While the uncanny has appeared in Hoffman's the "Sandman". "Supernatural is an event consider as out of nature, something beyond human realization. Supernatural is Belonging or relating to or being phenomena that cannot be explained by the laws of nature or physics. Whereas Uncanny '' has to do with a sense of strangeness, mystery or eeriness. ...read more.

Hoffman's story the "Sandman" makes the reader experience a feeling of uncanny. Nathaniel, motivated by his curiosity, wants to see how the Sandman looks like, so he hides in the closet. Instead of seeing the Sandman he sees Coppelius, the lawyer, and identifies him with the dreaded Sandman. Nathaniel's father is engaged with Coppelius in strange experiments. While observing these experiments Nathaniel's imagination, motivated by the nurse's story, makes him see the sand bites, which the sandman throws as the red-coal bites Coppelius working with. He also hears Coppelius saying, "eyes here, eyes here...". These strange experiments lead to Nathaniel's father death and to the disappearance of Coppelius. As a result Coppelius is linked in Nathaniel's imagination with the disturbance of the safety of the family life. When Nathaniel grows up and goes to college he keeps in his mind the image of Coppelius, the sandman. And then he starts seeing the sandman figure in each man that he does not feel comfortable to including "Coppola", the optician, and professor Spalanzani. He becomes haunted by the sandman image. During his search for the Sandman, Nathaniel meets Olympia, the inanimate doll, and becomes attracted to. Then Nathaniel returns back to his home having the intention to get married to his beloved Clara, before his dream of unity is achieved, he commits suicide after trying to kill Clara. ...read more.

While in the "Sandman" most events can be analyzed psychologically. Rationality is found in the "Sandman" since all Nathaniel's actions are explained as a psychoanalyst experience. While Coleridge's poem may not be accepted by rationalists for including many supernatural and unexplained events. The "Rime of the Ancient Mariner" represents also a spiritual experience; the mariner examines a spiritual journey from isolation and alienation to a process of integration with nature. And this experience enables him to see the vision of creatures lighting their hands as tortures to show him his path after being purified of his sin. Hence, we find that although both of the writers share a desire to transfigure or transcend the ordinary, each of them used his possess imaginations through different strategies to connote the reality they lived in. To conclude, we find that Hoffman like Coleridge, competing elements such as: revolutionary, reactionary, political, social, supernatural and uncanny to represent the truth. This essay started by a short definition to supernatural and uncanny. Then it discussed supernatural within the "Rime of the Ancient Mariner" and the uncanny in the "Sandman". Finally, a comparison between both texts has been done. Reference: - B. Stephen- Romantic Writing - 2004 The open university - chapter 6,8,10- Part two,P.364,318. - W. Dennis -The Realist Novel -2004 The Open University - Chapter 1,3. - W.R.Owens and J. Hamish - Romantic writings: An Anthology - Volume 2- P.8, 166, - 2004 The open university. ...read more.