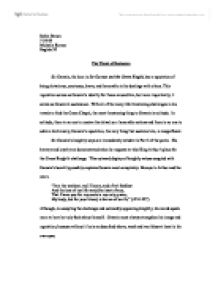 The Threat of Seclusion in Sir Gawain and the Green Knight

Robin Brown 7-23-03 Michelle Karnes English 20 The Threat of Seclusion Sir Gawain, the hero in Sir Gawain and the Green Knight, has a reputation of being chivalrous, courteous, brave, and honorable in his dealings with others. This reputation serves as Gawain's identity for those around him, but more importantly, it serves as Gawain's sustenance. With all of the many life-threatening challenges in his travels to find the Green Chapel, the most threatening thing to Gawain is solitude. In solitude, there is no one to receive his chivalry or honorable actions and there is no one to admire his bravery; Gawain's reputation, the very thing that sustains him, is insignificant. Sir Gawain's knightly ways are immediately evident in Part I of the poem. His bravery and loyalty are demonstrated when he requests to take King Arthur's place for the Green Knight's challenge. This outward display of knightly values coupled with Gawain's humility possibly explains Gawain most completely. He says to Arthur and the court, "I am the weakest, well I know, and of wit feeblest And the loss of my life would be least of any; That I have you for my uncle is my only praise; My body, but for your blood, is barren of worth;" (l.354-357) Although, in accepting the challenge and outwardly appearing knightly, his words speak more to how he truly feels about himself. ...read more.

But I must to the Chapel to chance my luck And say to that same man such words as I please, Befall what may befall through Fortune's will or whim." It could be argued that Gawain shows such courage here because he has the magic girdle to protect him and not because he must uphold his brave reputation. But, I would argue that if this was the case, why does Gawain flinch moments later when the Green Knight prepares to cut him with the axe? It just does not follow reason; the only explanation could be Gawain's investment in his reputation. This investment in his reputation is evident throughout the poem, but mostly in Gawain's interactions with Lady Bertilak. Lady Bertilak's function is to aid the Green Knight in testing the reputation of King Arthur's court. So, throughout most of her interaction with Gawain, she attempts to persuade him into actions that are unbefitting a knight. Predominantly, she tests his chivalry. Aware of Gawain's investment in his reputation, Lady Bertilak questions his identity repeatedly to aid in her attempts. Gawain's reaction to her initial questioning is fear that he said something discourteous. He then uses his excellence in language and successfully assures her of his identity yet gracefully defers her attempts without being unmannerly. Gawain is certainly comfortable and content in these exchanges with Lady Bertilak. ...read more.

(l. 2429-2435) Gawain's reaction supports the theory that he would rather have died then mar his reputation. However when he goes back to the court with great shame and disgrace he is greeted with "gay laughter and gracious intent". The court is not at all concerned with Gawain's "failure", instead they are ecstatic for his success in defeating death and upholding the reputation of the court. It is also interesting to note that Bertilak, in contrast to Gawain, but in agreement with the court, does not see Gawain as a failure. He says, "Yet you lacked, sir, a little in loyalty there, But the cause was not cunning, nor courtship either, But that you loved your own life; the less, than, to blame." (l. 2365-2369) Gawain, considered by many to be his own worse critic, is successful in his attempt to divert death, but possibly to his own dissatisfaction. In his attempt to evade death, Gawain marred his reputation would possibly have rather perished. Gawain, however, does deal with his fear of a blemished reputation in wearing the girdle until he may "breathe [his] last". This is his first step of becoming more comfortable with the idea of his imperfection and dealing with his biggest threat, solitude. For, if he can handle not having a perfect reputation, possibly he can handle not having one at all. ...read more.