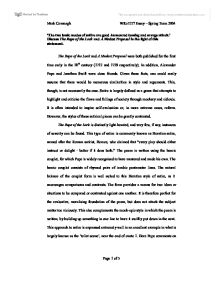 'The two basic modes of satire are good-humoured teasing and savage attack.' Discuss The Rape of the Lock and A Modest Proposal in the light of this statement.

'The two basic modes of satire are good-humoured teasing and savage attack.' Discuss The Rape of the Lock and A Modest Proposal in the light of this statement. The Rape of the Lock and A Modest Proposal were both published for the first time early in the 18th century (1712 and 1729 respectively). In addition, Alexander Pope and Jonathan Swift were close friends. Given these facts, one could easily assume that there would be numerous similarities in style and arguments. This, though, is not necessarily the case. Satire is largely defined as a genre that attempts to highlight and criticise the flaws and failings of society through mockery and ridicule. It is often intended to inspire self-evaluation or, in more extreme cases, reform. However, the styles of these satirical pieces can be greatly contrasted. The Rape of the Lock is distinctly light-hearted, and very few, if any, instances of severity can be found. This type of satire is commonly known as Horatian satire, named after the Roman satirist, Horace, who claimed that "every play should either instruct or delight - better if it does both." The poem is written using the heroic couplet, for which Pope is widely recognised to have mastered and made his own. The heroic couplet consists of rhymed pairs of iambic pentameter lines. The natural balance of the couplet form is well suited to this Horatian style of satire, as it encourages comparisons and contrasts. ...read more.

This is made apparent at the very beginning of the poem, with Pope asking, "What mighty contests rise from trivial things?" This conforms with the Horatian ideals, as it very much appears as if Pope is attempting to reason with his target audience rather than attack their morals or beliefs. Typical features of an epic are seen throughout the poem. The appearance of the sylphs and other supernatural entities, for example, liken the situation to a struggle between the natural and supernatural. The depiction of Belinda as a pure and virtuous figure as opposed to the mysterious and somewhat nefarious baron also suggests a battle between good and evil, which is also common in classical epics. This style allows Pope to steer clear from his own personal opinions, which is extremely important in maintaining the atmosphere of impartiality required to lower the seriousness and harshness of the poem. Jonathan Swift, on the other hand, writes in a discursive style, which allows him to project his own outlook. This allows for a much more attacking and ruthless approach in writing. This style is known as the Juvenalian style, again named after a Roman satirist, which focuses much more on the evils and corruption of human society with an increased sense of pessimism and contempt. Swift's essay discusses extreme methods for solving Ireland's problems. ...read more.

Such a bizarre solution is seemingly mocking of genuine solutions proposed by the government, and by highlighting this, Swift is ridiculing the manner in which the government approaches these problems. In conclusion, The Rape of the Lock and A Modest Proposal are prime examples of the two main types of satire. Pope's piece exhibits the good-humoured Horatian style, through which he can make his point without alienating or offending anyone. Swift's piece, on the other hand, highlights the shocking and harsh value of a savage attack. Both pieces are effective in their own ways, largely due to the fact that they had distinctly different goals. For example, the Juvenalian style would not have effectively settled the dispute Pope was attempting to resolve in his poem, as it would have only served to cause offence and probably made the situation worse. Similarly, the Horatian style would no have been suitable in an assault on the government's ethics, as something on such a large scale would have to stand out, which a mere teasing would not achieve. The style of satire is significantly dependant on the target audience and what the writer/poet is setting out to achieve, as the very nature of satire is extremely liable to cause damage through its ridiculing and mocking features. 1,404 words Mark Cavanagh WKoTiT? Essay - Spring Term 2004 Page 1 of 5 ...read more.