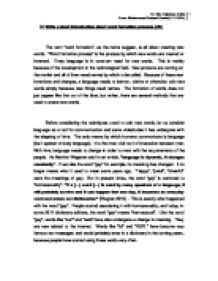 (a) Write a short introduction about word formation process. [20] The term "word formation", as the name suggest, is all about creating new words. "Word formation process" is the process by which new words are created or invented. Every language is in constant need for new words. This is mainly because of the development in the technological field. New products are coming on the market and all of them need names by which to be called. Because of these new inventions and changes, a language needs to borrow, derive or otherwise coin new words simply because new things need names. The formation of words does not just appear like that out of the blue, but rather, there are several methods that are used to create new words. Before considering the techniques used to coin new words, let us consider language as a tool for communication and some vicissitudes it has undergone with the elapsing of time. The only means by which humans communicate is language (be it spoken or body language). It is the most vital tool of interaction between men. With time, language needs to change in order to meet with the requirements of the people. As Martina Wagener said in an article, "language is dynamic, it changes constantly". If we take the word "gay" for example, its meaning has changed. ...read more.

Some examples of borrowing are organised in the table below. Words Source of borrowing Croissant French Sofa Arabic Deksi Bhojpuri Zebra Bantu "Calque" is a type of borrowing. It is also known as a 'loan translation' because "there is direct translation of elements of word into the borrowing language" (Yule 2006). "Gratte-ciel" (a French term) is a very common example of calque. "Gratte-ciel" can literally be translated as "sky scraper". The last most common word formation process remaining is compounding. Compounding is the process of combining words together to form a new word that "does not denote two things, but one" and that is "pronounced as one unit" (Winicwski 2007). In simpler words, compounding means joining together two different independent words to create a one. Typically there are three types of compounding namely, solid, hyphenated and open compounding. The table below show examples of each of the three types of compounding. Types of Compounding Words Used Words Formed Solid "finger" + "print" Fingerprint Hyphenated "good" + "looking" Good-looking Open "reading" + "material+ Reading material Besides these three major word formation processes, there are also minor word formation processes. They are minor in the sense that they are not as much used as borrowing, derivation and compounding in coining new words. Acronymic formations, clipping, onomatopoeia, blending and back formation would fall in the category of minor word formation processes. ...read more.

Here again we should take English language as example. English is an international language. This is greatly because of the word formation mechanism used to coin new words in the language. With a lot of vocabulary in the English language, the latter has become versatile. A word can be changed into a very or an adjective. An example is the word "danger" which can be transformed into the verb "endanger" and adjective "dangerous". So word formation increases the importance of language. When a language creates new words, by borrowing for instance, it not only helps maintain that language's own vitality but also other languages can borrow from the initial language. For example English borrowed the word "sofa" from Arabic, and Creole borrowed the word "sofa" from English. When English borrows, there are other languages that borrow from the "borrower" language. This keeps other languages alive as well. A language can die. Absence of word formation process can cause its death. There are many ways in which a language can die. "Many of India's languages are at risk of dying our" (National Geographic News 2009). Linguists have maintained that a language dies due to several occurrences like influence of the west, lack of speakers of that language and most importantly, lack of word formation kills a language. In Mauritius, the Bhojpuri language is feared to be extinct. This is why the government has decided to inculcate Bhojpuri in the curriculum of primary schooling. (c) Borrowings in Mauritian Creole Source of borrowings. ...read more.