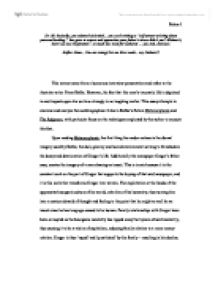 This essay attempts to examine and analyze the autobiographical links in Kafka's fiction Metamorphosis and The Judgment, with particular focus on the techniques employed by the author to execute this feat.

Dr. Ill: Basically, you talented sick mind... you used writing as "self torture to bring about personal healing." You grew to expect and appreciate your father's abuse didn't you? Without it, there was less inspiration - so much less need for catharsis ... you sick, sick man. Kafka: Nooo... You are vrong! Eet vas hisss vault... my Vatherr!!! This extract came from a humorous interview-presentation and refers to the Austrian writer Franz Kafka. However, the fact that this man's traumatic life is depicted in and impacts upon his work so strongly is no laughing matter. This essay attempts to examine and analyze the autobiographical links in Kafka's fiction Metamorphosis and The Judgment, with particular focus on the techniques employed by the author to execute this feat. Upon reading Metamorphosis, the first thing the reader notices is the dismal imagery used by Kafka; the dull, gloomy and humid environment serving to foreshadow the decay and deterioration of Gregor's life. Additionally the newspaper Gregor's father uses, creates the imagery of a man chasing an insect. This is ironic because it is the constant work on the part of Gregor that supports the buying of that said newspaper, and it is this work that transforms Gregor into vermin. ...read more.

The division within Kafka's world, is a division of the mind itself - Gregor's condition thus possibly being a physical manifestation of the grotesque realization of hopelessness inside. Kafka seems to have possessed quite an existentialist and nihilistic view. It appears, that evil for Kafka - and by extension, Gregor, found in this hopelessness, is attributable in some way to human consciousness; it is a kind of mistake or failure within the evolutionary process of the mind. The mind seems to be lacking the desire to further evolve, thus accepting as final, as real, its knowledge of the world.1 Faced with this, it is no wonder Gregor fell into a state of hopelessness and despair, thus leading to his decline. Evidently, Kafka was quite a philosopher, and his views surface in his works. His literary efforts in fact, were oft described as psychoanalytic writing - in short, Kafka used writing as a form of catharsis; 'self torture to bring about personal healing'. It is held that Kafka reached the conclusion ahead of Freud that the "origin of neurosis lies in a son's relationship to his father." Kafka wrote a 'letter' to his dad - a small masterpiece of psychoanalytic writing which he never delivered. ...read more.

His nihilistic and existentialistic stance lends strongly to his works, suggesting that the value judgments which we hold dear are nothing more than our own perspective on reality. None are absolute, implying that in the end - none are really to be taken seriously. However, although the reality of the situations Kafka creates for his characters is questionable, the intense moral seriousness with which he writes is not. The situations may be a 'laughing matter' but the way Kafka tells it (utilizing techniques such as clear imagery, symbolism, metaphor and allusion, just to name a few), is certainly serious and perhaps even terrifying. These techniques portray transformation and decline at the hands of a harsh experience with both Kafka's and his characters' fathers, family and society at a whole - serving to drive them to the state where they lose their humanity (Gregor's transformation into an insect, and Georg's suicide). Kafka is definitely clear in his writing, with his attempts to cleanse himself of his pain, like Georg achieved by jumping into the river. Though he doesn't commit suicide, Kafka too is condemned to emotional 'death' by his father, and his 'jump' is his writing. With this in mind, Kafka definitely can be seen as 'fictionalizing' his own experience. ...read more.