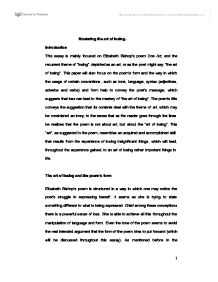 This essay is mainly focused on Elizabeth Bishops poem One Art, and the recurrent theme of losing, depicted as an art, or as the poet might say: the art of losing. This paper will also focus on the poems form and the way in which the usa

Mastering the art of losing. Introduction This essay is mainly focused on Elizabeth Bishop's poem One Art, and the recurrent theme of "losing", depicted as an art, or as the poet might say: "the art of losing". This paper will also focus on the poem's form and the way in which the usage of certain conventions, such as tone, language, syntax (adjectives, adverbs and verbs) and form help to convey the poet's message, which suggests that loss can lead to the mastery of "the art of losing". The poem's title conveys the suggestion that its contents deal with the theme of art, which may be considered an irony; in the sense that as the reader goes through the lines he realizes that the poem is not about art, but about the "art of losing". This "art", as suggested in the poem, resembles an acquired and accomplished skill that results from the experience of losing insignificant things, which will lead, throughout the experience gained, to an art of losing rather important things in life. The art of losing and the poem's form Elizabeth Bishop's poem is structured in a way in which one may notice the poet's struggle in expressing herself. It seems as she is trying to state something different to what is being expressed. ...read more.

Throughout the poem, the changes in tone and speaker bestow the poet's efforts to cover up her true feelings. She goes from denying the importance of losing significant, but rather essential things, to the loss of personal belongings. The usage of colloquial language intensifies the poems emotional power that has been hidden until now. The rhyme scheme Bishop employs and the usage of the "villanelle" appeal to put forward the intention and message of the poem, apart from lessening the seriousness of Bishop's true feelings. The poem in the fourth and fifth stanzas gains intensity, since the poet refers to the loss of properties, and places. She changes from second person to first person speaker. Her emotions are being revealed through the usage of adjectives to denote the importance those properties meant to her. Adjectives such as: Loved and lovely, reveal the poet's emotions which are gradually disclosed all the way through the poem, although Bishop goes on denying the pain such loss represents by implying "but it wasn't a disaster"(line 15). In the final stanza, the tone of the poem has shifted radically; it has become a sad one which exposes the truth behind the poem. The poet is unable to put forward her intentions, it seem as if she is trying to surrender upon her denial of pain caused by the loss. ...read more.

At the beginning of the poem not much is disclosed regarding intention and meaning, but as the reader goes through the poem, the major circumstances of meaning and intention become obvious. By means of the shifts in speakers, Bishop is able to intensify the meaning and intention of the poem; she starts the first three stanzas by using a second person speaker which addresses a reader by suggesting certain actions throughout imperatives. She begins the fourth stanza by shifting from a second person narrator into a first person speaker to intensify the poem's meaning; by means of this the poet becomes involved in the poem making it personalized. As a general principle, the poem's major irony is that even the best and most enviable circumstances of life, referring to the loss of something or someone, contain inherent imperfections, such as pain and an unarticulated frustration that can be begotten by the loss of someone. Therefore, we can conclude by saying that mastering the "art of losing" is hard to master. The feeling caused by the loss of things can resemble ease in accepting the loss, whereas, in the last stanzas of the poem the loss refers to bigger rather significant things which go from personal things to people. The contrasts relies in the loss itself, we as normal people are not ready or even prepared to lose the presence of people, therefore, the failure in the art of losing as mastery becomes evident. ...read more.