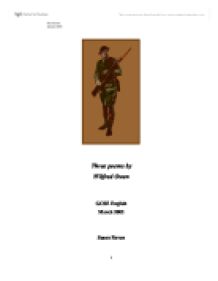 Three poems by Wilfred Owen GCSE English March 2002 Susan Raven Assignment: How does Wilfred Owen put across the horrors of war in his poems? This essay will consider three poems written by Wilfred Owen during his time serving as a British Officer on the French front during the First World War. The first work considered is Dulce et decorum est, second Spring Offensive and finally Anthem for a Doomed Youth. I will demonstrate Owen's ability to illustrate and explain the stark horrors and emotions he experienced and witnessed. Dulce et decorum est The title of this poem is Latin and translates to, 'How sweet and decorous it is to die for your country'. I take this to be an ironic gesture on the part of Owen, as to die in the manner or conditions described in the poem is far from sweet or honourable more of horror and despair, that would abhor those at home if they were aware of these conditions. The poem is written in Stanza form, a stanza being a group of lines forming the basic recurring metrical unit in a poem, a verse. The first stanza describes the soldiers leaving the front line, the picture is one of pitiful, crippled men, they have lost their boots, uniforms are damaged and dirty like 'old sacks' and their feet are covered with blood, they limp through a terrain of mud and sludge (onomatopoeia). ...read more.

Ironically, this was Wilfred Owen's last poem, so his own "last hill". There is a pause here, where the soldiers rest, they have the opportunity to ponder and contemplate the future including the realistic possibility of imminent death. In the second part of this stanza, Owen describes the scenery, not unlike an English countryside in spring. He uses onomatopoeia when he describes the sound of insects as "murmurous". He uses onomatopoeia when he describes the healing power of nature as "oozed" and further describes the atmosphere and mood of the soldiers in simile form as "like an injected drug for their bodies' pains"; here Owen describes the use of opiates, which was far more acceptable at the time, for example in Opiate dens. The last two lines bring the reader back to reality. Owen uses the sharpness of "S" sounds to illustrate the feeling of the men as they watch the sky flash like a "mysterious (looking)-glass" or mirror, as the battle continues in the distance. Slow boots in the second stanza describe the slow and difficult advance to their present position, when they ponder the "warm field and the far valley behind" is a metaphor for considering previous battles fought. Their boots had been "blessed with gold" this being a precious colour of the growing flowers "buttercups", implies some divine assistance with the battle. ...read more.

Further, in line four Owen relates that only the sound of this weaponry can "patter out" their "hasty orisons" or prayers. To patter is to repeat prayers in a mechanical or perfunctory manner. The last four lines of the first stanza illustrate there are no religious rites or rituals for the soldiers; Owen uses personification of the "wailing shells" when he refers to them as "demented choirs" mourning those killed. Finally Owen refers to "bugles calling - from sad shires", here he utilises the imaginary call of those missing the soldiers from the British "shires". The second verse starts with a further question and its answer: using the contrast of religious imagery to the realism of loss and bereavement. Owen asks, "What candles - to speed them all", to speed the dead souls to heaven. He answers there are no candles, only glimmers in the eyes of boys who say goodbye to the dead. The boys referred to are the young soldiers, comrades in arms rather than alter boys. Personification in the pall, or coffin cover in the form of the paleness or pallor of girls, the girls being the wives, mothers and girlfriends left behind to grieve their loves: suffering, as if patiently and tender. The "slow dusk" as the grieving mourn and the "drawing of blinds" portraying an air of closure, sadness and loss for those young lives lost in war with no ritual or meaning. ...read more.