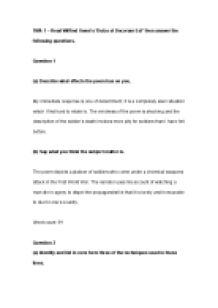 ﻿TMA 1 ? Read Wilfred Owen?s ?Dulce et Decorum Est? then answer the following questions. Question 1 (a) Describe what effects the poem has on you. My immediate response is one of detachment; it is a completely alien situation which I find hard to relate to. The vividness of the poem is shocking and the description of the soldier?s death invokes more pity for soldiers than I have felt before. (b) Say what you think the subject matter is. The poem depicts a platoon of soldiers who come under a chemical weapons attack in the First World War. The narrator uses his account of watching a man die in agony to dispel the propagandist lie that it is lovely and honourable to die for one?s country. Word count: 91 Question 2 (a) Identify and list in note form three of the techniques used in these lines. Simile Metaphor Onomatopoeia (b) ...read more.

(b) In no more than two sentences explain how the context helped you to understand the poem. The poem was written in 1917 during World War 1 and probably directed at the English writer Jessie Pope who was famous for encouraging men to go to war and scorning those who did not. This was a time when young boys and men were going to war, believing it to be their duty but also the only way to distinguish themselves in a society obsessed with glory and honour. (c) In continuous prose (that is, in paragraph form rather than bulleted points or notes), write an account of this poem, showing how the techniques used create the effects that lead to your interpretation of the meaning of the poem. Use no more than 500 words in your answer. This poem is an illustration of the reality of war; it seeks to contradict the glorification of war by confronting the reader with a horrific account of death witnessed by the poem?s narrator. ...read more.

The narrator describes a soldier ?yelling out? as if for help and ?stumbling? as if the soldier were desperately looking on the ground for his mask. The narrator separates this soldier from himself ?as under a green sea?, creating an immovable barrier between them to illustrate the fact that the soldier is beyond help. The image of a man ?flound?ring? and ?drowning? in a green sea implies a painful and terrifying death which is nothing like the ?lovely? death described in Horace?s famous quote, Dulce et decorum est. Owen deliberately tries to shock the reader through his description of the unfortunate soldier in the fourth stanza. The dying soldier?s physical appearance is described in vivid and graphic detail, the use of alliteration such as ?watch the white eyes writhing in his face? emphasises the appalling and grotesqueness of the scene, it also suggests the narrator is haunted by those eyes. The reason why Owen tries to shock the reader is clear, he hopes to inform the reader and make them understand the true nature of war. ...read more.