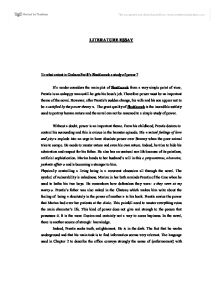 To what extent is Graham Swift&amp;#146;s Shuttlecock a study of power ?

LITERATURE ESSAY To what extent is Graham Swift's Shuttlecock a study of power ? If a reader considers the main plot of Shuttlecock from a very simple point of view, Prentis is an unhappy man untill he gets his boss's job. Therefore power must be an important theme of the novel. However, after Prentis's sudden change, his wife and his son appear not to be " satisfied by the power theory ". The great quality of Shuttlecock is the incredible suttlety used to portray human nature and the novel can not be resumed to a simple study of power. Without a doubt, power is an important theme. From his childhood, Prentis desires to control his surounding and this is ovious in the hamster episode. ...read more.

Prentis's father was also naked in the Chateau which makes him write about the feeling of being " absolutely in the power of another " in his book. Prentis envies the power that Marian had over her patients at the clinic. This painfull need to master everything ruins the main character's life. This kind of power does not give real strengh to the person that possesses it. It is the mere illusion and certainly not a way to acces hapiness. In the novel, there is another source of strengh : knowledge. Indeed, Prentis seeks truth, enlightement. He is in the dark. The fact that he works underground and that his main task is to find information seems very relevant. ...read more.

He thinks that his father is strong because he has found a way to escape. A certain form of power is in knowledge. It partly explains Prentis's sudden change. But more important is the feeling that he hasn't his place in his family and work. Because of his low self esteem, he probably still considers himself as " non descript and odorlous ". His difficult relation (devellopped in a previous essay) with his father is due to the fact that Prentis thinks that he cannot live up to him. After having learnt about his father's double trahison, he breaks the perfect father image and he manages to settle. Shuttlecock is a complex and intelligent analysis of different forms of power and strengh. Indeed it appears that true power lies not in physical control or factual knowledge but in the certainty that you have a place in the world. 641 words ...read more.