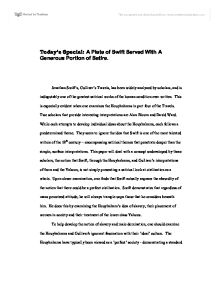 Today&amp;#146;s Special: A Plate of Swift Served With A Generous Portion of Satire.

Today's Special: A Plate of Swift Served With A Generous Portion of Satire. Jonathan Swift's, Gulliver's Travels, has been widely analyzed by scholars, and is indisputably one of the greatest satirical works of the human condition ever written. This is especially evident when one examines the Houyhnhnms in part four of the Travels. Two scholars that provide interesting interpretations are Alan Bloom and David Ward. While each attempts to develop individual ideas about the Houyhnhnms, each follows a predetermined theme. They seem to ignore the idea that Swift is one of the most talented writers of the 18th century - encompassing satirical themes that penetrate deeper than the simple, surface interpretations. This paper will deal with a concept undeveloped by these scholars; the notion that Swift, through the Houyhnhnms, and Gulliver's interpretations of them and the Yahoos, is not simply presenting a satirical look at civilization as a whole. Upon closer examination, one finds that Swift actually exposes the absurdity of the notion that there could be a perfect civilization. Swift demonstrates that regardless of mans perceived attitude, he will always trample uopn those that he considers beneath him. He does this by examining the Houyhnhnm's idea of slavery, their placement of women in society and their treatment of the lower class Yahoos. To help develop the notion of slavery and male domination, one should examine the Houyhnhnms and Gulliver's ignorant fascination with their 'ideal' culture. ...read more.

1072). Men dominate Houyhnhnm society and when Gulliver tells of his homeland he refers to the queen as a "female man" (Swift IV. 1080). The master male horse later informs Gulliver that it is common practice for Yahoo women to get into groups and "chatter" and "stare" at other Yahoo women. Gulliver notes however, that it is nearly "instinct" for women to display "the rudiments of lewdness, coquetry, censure, and scandal" (Swift IV. 1093). Again Swift mockingly points a finger at Gulliver by allowing him to fall victim to his own stereotypes. Swift develops Gulliver's character with a dose of gullibility (although this is an entirely different argument) to allow him to fall victim to the general notion of society - particularly one dominated by male influence and mentality. Further to this argument, women in Houyhnhnm society are treated almost as a commodity and this concept is entirely void in the critical studies by Bloom and Ward. Male Houyhnhnms are "pleased to direct [their] own mare" (Swift IV. 1076) as though they are directing their servants. The number of children is strictly enforced upon upper-class matrons and once a matron Houyhnhnm has produced her required number of offspring she "no longer accompanies [her] consort" (Swift IV. 1096). The only exception to this is if one of her colts, or her friends colts dies, then she is permitted "to go together a second time, until the mother be pregnant" (Swift IV. ...read more.

Yahoos perform not only the physical labour of the day but are also required to "draw home the sheaves in carriages" (Swift IV. 1099) much like horses are required to do in Gulliver's homeland. The Houyhnhnms' decide it would be advantageous to society to castrate the Yahoos. They decide at a meeting that if "practiced among the younger Yahoos" this intervention would "not only render them tractable and fitter for use," but would also "put an end to the whole species without destroying life" (Swift IV. 1098). This practice is not considered cruel by anyone in the Houyhnhnmian village, mainly because the Yahoos are considered so vile and hideous - often trampling down the Houyhnhnm's oats and grass. This treatment of the Yahoos leaves one to consider that the Houyhnhnm race is not entirely decent and kind. In actuality they represent the absurdity of man living in perfect peace and harmony. Man, according to Swift, is irrevocably destine to pursue a better life, even if that means trampling the lives of those 'beneath' him. Swift's surface interpretation that Swift presents the Yahoos to show total irrationality and intellectual nullity while presenting the idea that the Houyhnhnms are "entirely rational and intelligent in all their behavior, their beliefs and their emotions" (Ward 170) must be disregarded. Swift presents the Houyhnhnms and the Yahoos together to present the obvious and subtle in an ironic fashion. As one, the Houyhnhnms and Yahoos satirically represent the undeniable truth that humanity is destine to run itself according to personal gain and reward - regardless of the cost to others. ...read more.