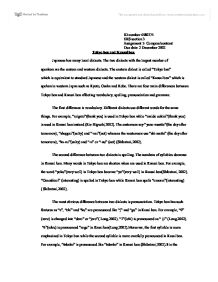 Tokyo ben and Kansai ben - Japanese has many local dialects.

ID number 4580175 ERS section 3 Assignment 5: Compare/contrast Due date: 2 December 2002 Tokyo ben and Kansai ben Japanese has many local dialects. The two dialects with the largest number of speakers are the eastern and western dialects. The eastern dialect is called "Tokyo ben" which is equivalent to standard Japanese and the western dialect is called "Kansai ben" which is spoken in western Japan such as Kyoto, Osaka and Kobe. There are four main differences between Tokyo ben and Kansai ben affecting vocabulary, spelling, pronunciation and grammar. The first difference is vocabulary. Different dialects use different words for the same things. ...read more.

in Tokyo ben become "yo"(very well) in Kansai ben(Shibatani, 2002). "Omoshiroi" (interesting) is spelled in Tokyo ben while Kansai ben spells "omoroi"(interesting) ( Shibatani,2002). The most obvious difference between two dialects is pronunciation. Tokyo ben has such features as "z", "chi" and "ku" are pronounced like "j" and "gu" in Kasai ben. For example, "0" (zero) is changed into "dero" or "jero"( Long,2002). "1"(ichi) is pronounced as " iji" (Long,2002). "6"(roku) is pronounced "rogu" in Kasai ben(Long,2002).Moreover, the first syllable is more emphasized in Tokyo ben while the second syllable is more carefully pronounced in Kasai ben. For example, "tabako" is pronounced like "tabako" in Kansai ben (Shibatani,2002).It is the same as in the case of the name of a person. ...read more.