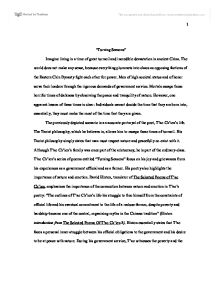 "Turning Seasons" Imagine living in a time of great turmoil and incredible devastation in ancient China. The world does not make any sense, because everything plummets into chaos as opposing factions of the Eastern Chin Dynasty fight each other for power. Men of high societal status and of honor serve their leaders through the rigorous demands of government service. Mortals escape these horrific times of darkness by observing the peace and tranquility of nature. However, one apparent lesson of these times is clear: Individuals cannot decide the time that they are born into; essentially, they must make the most of the time that they are given. The previously depicted scenario is an accurate portrayal of the poet, T'ao Ch'ien's life. The Taoist philosophy, which he believes in, allows him to escape these times of turmoil. His Taoist philosophy simply states that man must respect nature and peacefully co-exist with it. Although T'ao Ch'ien's family was once part of the aristocracy, he is part of the ordinary-class. T'ao Ch'ien's series of poems entitled "Turning Seasons" focus on his joy and grievances from his experiences as a government official and as a farmer. His poetry also highlights the importance of nature and emotion. David Hinton, translator of The Selected Poems of T'ao Ch'ien, emphasizes the importance of the connection between nature and emotion in T'ao's poetry: "The outlines ...read more.

He can only choose to be a good man by leaving the government service. Essentially, his individual choice has brought him peace and has allowed him to appreciate his time on Earth. His choice has also brought him closer to nature and the Taoist way, because his soul would no longer see the sadness of government service. The second poem of this series describes T'ao's newly found freedom after he leaves the government service. T'ao compares washing himself clean in a lake to a new start. "Boundless, the lake's immaculate/ skin boundless, I rinse myself/ clean" (1-3). The key expression that brings light to the meaning of this quotation is "immaculate/ skin" (1-2). "Immaculate/ skin" (1-2) refers to something that is free from moral errors. On the other hand, when T'ao is stating that he "rinses"(2) himself "clean" (3), he is saying that he is free from the mistakes of his past. He is using nature as a means of comparison in this poem, because he is comparing the lake's clean water to his new moral attitude. This new moral attitude is the attitude of a recluse-farmer. T'ao has chosen to become a recluse-farmer, because he wants to escape the heartache of society and government service. As a recluse farmer, he is free from the hardship of government service, because he free from the sight of human suffering. ...read more.

T'ao may not have chosen the time he was born into, but he chose how he spent that time on Earth well. "If his sensibility seems familiar, it is a measure of his lasting influence" (Hinton 8). Turning Seasons Turning Seasons is about wandering in late spring. Spring clothes are all made, and everything in sight is tranquil. I wander beside my shadow, alone, my heart a blend of delight and grief. I Turning seasons turning wildly away, morning's majestic calm unfolds. Out in the springs clothes, I cross eastern fields. A few clouds linger, sweeping mountains clean. Gossamer mist blurs open skies. Feeling the south wind, young grain ripples like wings. II Boundless, the lake's immaculate skin boundless, I rinse myself clean. The view all distance, all distance inciting delight, I look deep. They say if you're content you're satisfied easily enough. Raising this winecup, I smile, taken by earth's own joy. III Gazing midstream, longing for that clear Yi River, I see sage ancients there, taking in spring and returning carefree in song. what exquisite calm. I'd join them in a moment, but nothing's left of their world now, only sorrow and distance. No way back, IV I'm home day-in day-out, taking things easy. Herbs and flowers grow in rows. Trees and bamboo gather shade. My koto is turned clear, and a half-jar thick wine waits. Unable to reach hat golden age Huang and T'ang ruled, I inhabit who I am sad and alone. ...read more.