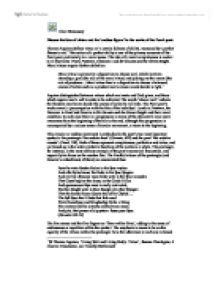 Virtue and the 'endless figure' in the works of the Pearl-poet. The Pearl-poets works reveal a preoccupation with the fate of the individual: Jonah in Patience, the Dreamer in Pearl and Gawain in Sir Gawain and the Green Knight and their moral conditio

Discuss the idea of virtue and the 'endless figure' in the works of the Pearl-poet. Thomas Aquinas defines virtue as 'a certain fullness of ability, measured by a perfect fitness to act.' This notion of a perfect ability is one of the primary concerns of the Pearl-poet, particularly in a moral sense. The idea of a moral completeness is central to all four texts: Pearl, Patience, Cleanness and Sir Gawain and the Green Knight. Moral virtues require further definition: Moral virtue is primarily a disposition to choose well, which involves intending a goal (the role of the moral virtue) and picking out the means (the role of prudence...Moral virtue then is a disposition to choose a balanced course of action such as a prudent man's reason would decide is right.1 Aquinas distinguished between virtues which are innate and God-given, and those which require man's will in order to be achieved. The words 'choose well' indicate the freedom man has to decide the course of action he will take. The Pearl-poet's works reveal a preoccupation with the fate of the individual: Jonah in Patience, the Dreamer in Pearl and Gawain in Sir Gawain and the Green Knight and their moral condition. In each case there is a progression in terms of the character's own moral awareness from the beginning of the tale to the end, although this progression is accompanied by a curious sense of circular movement, a return to the beginning. ...read more.

In Pearl however, we see the sacred incarnation of courtesy. Each of the five virtues had a secular and sacred counterpart, and whereas secular courtesy seems to be synonymous with a kind of emphatic and delicate social politeness, heavenly courtesy is associated with divine graciousness. Fitt VIII is circles round the virtue of courtesy, describing Mary as 'the quen of courtaysye'. (Perhaps this association is why Gawain is especially linked with Mary: when he is being tempted by the lady 'Gret perile bitwene hem stod/ Nif Mare of hir knight mynne (1768-9)). The poet refers to St Paul, saying that through courtesy, Al arn we membrez of Jesu Kryst: Als heued and arme and legge and naule Temen to hys body ful trwe and tryste Rycht so is vch a Krysten sawle A longande lym to the Mayster of myste. (Pearl, 458-62) He sees courtesy as uniting Christ's followers in the way that the parts of a body are united. We are reminded of Aquinas's metaphor of the virtues as the fingers, and there is this same sense of an organic whole, a living church. But the reference to the body also makes us think of the 'body politic'. While Pearl takes place in an imagined heaven, the marks of feudal hierarchy are very much present in its organisation. Throughout the work there is a constant interplay between a Christian and a courtly ethical vocabulary. ...read more.