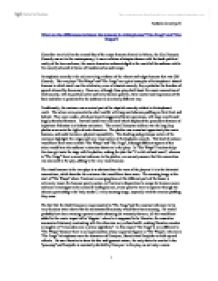 What are the differences between the humour in Aristophanes' &quot;The Frogs&quot; and &quot;The Wasps&quot;?

What are the differences between the humour in Aristophanes' "The Frogs" and "The Wasps"? Comedies were held on the second day of the major dramatic festival in Athens, the City Dionysia. Comedy was set in the contemporary; it was a collision of utopian dreams with the harsh political reality of the here and now, the comic characters acknowledged in the world of the audience whilst the comedy allowed all forms of transformation and escape. Aristophanic comedy is the only surviving evidence of the vibrant and vulgar humour that was Old Comedy. The two plays "The Wasps" and "The Frogs" are typical examples of Aristophanes' absurd humour in which insult was the celebratory core of classical comedy, they symbolise the freedom of speech allowed by democracy. However, although these plays both boast the comic convention of Old comedy, with its political satire and lively farcical qualities, their content and expression of the farce and satire is presented to the audience in an entirely different way. Traditionally, the costume was a central part of the slapstick comedy evident in Aristophanes' work. The actors were presented as short and fat with large and obscene padding on their front and behind. They wore masks, which portrayed exaggerated facial expressions, with large mouths and hugely distorted features. Portrait masks were also used which displayed the prominent features of important Athenians in a hideous caricature. The central Dionysiac emblem was the long limp phallus sewn onto the tights of male characters. ...read more.

In "The Frogs" the agon, between Dionysus and the chorus of frogs, is very amusing as quick replies and slapdash rhyme in the dispute make the agon very energetic and dynamic. In addition, the long metre that is repeated by both parties and then interspersed with shorter lyrics has a similar effect: "FROGS: Brekeke-kex, ko-ax .... .... ....marshes and bogs. DIONYSUS: I don't want to row anymore, FROGS: Brekeke-ex! DIONYSUS: For my bottom is getting so sore. Brekeke-ex!" The symmetrical nature of the agon makes this part of the play short and snappy creating a much more sophisticated undertone to the humour, while still appealing to the lesser-educated Athenians because of the simple language and amusing images of "burps" and "blisters" on Dionysus' "delicate bum". In "the Wasps" the dispute is preceded by a preliminary agon, which is very violent and visual, much less of a play on words, and it is hinted that it is more of a choreographic battle, this is shown by the very lively and active language as the leader of the wasps shouts out instructions to the rest of the chorus: "By the right, in reverse, quick march! ... Jab at his eyes." This also helps to show the intimidating nature of the wasps as Xanthias screams "Shoo! Shoo!" and "Drive them back". The agon is much more complicated in this play because the content of the debate is the basis for the main plot of the story, whereas in "The Frogs" this part of the play does not lead onto another subplot. ...read more.

The comic structure of the two plays is very similar and Aristophanes gaudy representation of Old Comedy is evident in both. However, due to the varying subject matter the humour in "The Frogs" and "The Wasps" is bound to differ because Aristophanes has to deal with the character he uses in different ways, for example, the chorus of Initiates in "The Frogs" have to be respected because this was the general consensus in Athenian society and so if Aristophanes had not venerated the Initiates he would have received heavy criticism. However, the chorus of jurymen in "The Wasps" are easily ridiculed because in 6th Century Athens they were a subject of constant mockery. The choruses which Aristophanes had to work with would have a significant impact on the style of the comedy, for example, the difference in the agones of the two plays is probably due to the fact that he might have had a more agile chorus with which to perform "The Wasps" and so he could use a chorographical battle for this agon, whereas in "The Frogs" the old chorus of initiates would have not been suited for this. Perhaps this is why Aristophanes has to use two forms of chorus, the frogs and the Initiates so that he could still keep his almost grotesque style in his treatment of the chorus. Both the plays conform to brash farce that was Aristophanic comedy; it is the subtle differences in presentation and emphasis, which make the plays appear so diverse in their comic nature. Arabella Llewellyn K 1 ...read more.