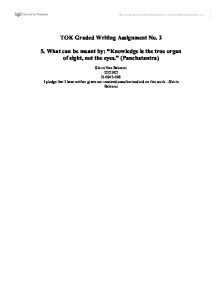 What can be meant by: &quot;Knowledge is the true organ of sight, not the eyes.&quot;

As also evident in the foregoing example, what the eyes and the brain see can be completely different. The Little Mermaid's eyes saw a fork, but her brain, unable to parallel the fork with any other archival data, translated the metal utensil into a comb. Same argument may be true for language: While one may see with their eyes, letters arranged in a particular order, without knowledge to make sense of the intent of the letters the letters would be meaningless. For example, a foreigner who comes to the United States from a country where they use the same type of alphabet but speak a different language may see important signs and, without knowledge of what they are saying, act in a manner that jeopardizes his health and the health of those around him. Even more likely is that the foreigner will automatically not notice many of the signs that he does not understand. Why? Because although the eyes received information that the signs are there, the brain is baffled and therefore chooses to ignore many of the unfamiliarities in order to comfort itself. As Reuben Abel stated, "What enters the eye is not really seen until it is organized by the brain." ...read more.

The archaeologist may uncover tools unparalleled in our society; since he has no knowledge of what the unknown object is, he analyses it carefully and justifies his conclusions based on his knowledge of his own society and emotions (knowledge by acquaintance) and what he has learned through his studies as an archaeologist (knowledge through study). Therefore, though it is essential that the object be observed carefully through the eyes, it is also very important that the observer has some sort of knowledge in order to be able to see what there is to see. While it is important to realize that our anatomical manifestation has designed the eyes as the organs of sight and has wired our brains to associate light activity with colours, dimensions, and emotions, knowledge is essential in the correct analysis of what is being observed. Therefore, although knowledge cannot literally be defined as an organ, to take the quote as literally referring to knowledge as a tangible entity would be inherently flawed. Knowledge, affected by belief, justification, and emotion, is the indispensable 'organ of sight,' as without it what one sees is no more than raw data. After all, one only sees what he wants it to be. ...read more.