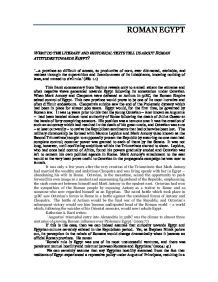 What do the literary and historical texts tell us about Roman attitudes towards Egypt?

ROMAN EGYPT WHAT DO THE LITERARY AND HISTORICAL TEXTS TELL US ABOUT ROMAN ATTITUDES TOWARDS EGYPT? '...a province so difficult of access, so productive of corn, ever distracted, excitable, and restless through the superstition and licentiousness of its inhabitants, knowing nothing of laws, and unused to civil rule.' (His. 1.1) This frank commentary from Tacitus reveals only to a small extent the extreme and often negative views generated towards Egypt following its annexation under Octavian. When Mark Antony and Cleopatra were defeated at Actium in 31BC, the Roman Empire seized control of Egypt. This new province would prove to be one of its most lucrative and often difficult endeavours. Cleopatra's suicide saw the end of the Ptolemaic dynasty which had been in place for almost 300 years. Egypt would, for the first time, be governed by Roman law. It was 14 years prior to this that the young Octavian - later known as Augustus - had been handed almost total authority of Rome following the death of Julius Caesar at the hands of forty conspiring senators. His position was a tenuous one: it was the creation of such an autocracy which had resulted in the death of his great-uncle, and Octavian was sure - at least outwardly - to revive the Republican sentiments that had otherwise been lost. The military dictatorship he formed with Marcus Lepidus and Mark Antony (also known as the Second Triumvirate) sought to supposedly protect the Republic by ensuring no one man had complete control; consular power was granted to each of them by the Senate. It was not long, however, until conflicting ambitions within the Triumvirate started to show. Lepidus, who had once held control of Africa, found his powers gradually eroded and Octavian was left to cement his own political agenda in Rome. Mark Antony's attachment to the east would at the very least prove useful to Octavian in the propaganda campaign he was now to launch. ...read more.

(2004: 41) Roman literature flourished in the Augustan period, and became one of the most important modes of propaganda in which Augustus himself could reinforce his image as the champion of Rome. It was under the patronage of Augustus' political advisor Maecenas that a new generation of poets - of which Horace is included - were encouraged to write poetry in the interests of the state. Propertius, although an elegist, references Actium several times in his work. Poem IV.6 is a prominent example of this, which celebrates the defeat of Cleopatra. He refers to her only as 'the female' - a continued refusal to honour her. Similar sentiments can be seen in III.2: a seemingly anti-Egyptian tone is created by cataloguing Cleopatra's most negative qualities; he spurns her 'foul marriage' (31) to Antony, her 'yelping' (41) deities, and her audacity as a woman to threaten a great empire. Nevertheless, as Guy Lee in his own translation of Propertius emphasises, whilst there is typical 'Augustan' material within the poems, 'it is unusual to find it without shades of irony, levels of ambiguity - or sheer cheek.' (1994: 12) This is perhaps a reflection - verging on mockery - of Augustus' excessive propaganda campaign against the east. It is important to note that the majority of those who wrote about Egypt had never actually been there; instead, they based their opinions on the hearsay of the time. Knowledge of the province, then, was surely limited and tainted with misconception. Furthermore, despite being restricted somewhat to write in a way which would please their patron, each poet writes with his own specific intention. Roger Matthews elaborates: 'Whenever Roman poets refer to Egypt and Egyptians, they do so in the context of their own agendas. For Horace and Virgil, the aim is to celebrate Augustus; Propertius sees Antony's infatuation with Cleopatra as a parallel to his own "enslavement" to Cynthia;... ...read more.

the negative image of Egyptians.' (2003: 214) The fact that he wrote under the genre of satire perhaps gave Juvenal more freedom to express such colourful criticisms; the distinctly highly-educated audience would at the very least have expected some levels of mockery, even rage, as he satirises the morality and beliefs of his contemporaries. Even so, we cannot assume that such emotive language was there because it was expected. Richard McKim identifies that the 'hot-headed' outbursts and sentimental moralising prolific in this particular Satire must indeed be read as self-expression on the author's part. Juvenal hints that he had visited Egypt at 15.45 ('Yes, Egypt is sure to be uncouth... I have found.') He accuses an entire Egyptian race of cannibalism, and compares his controversial story to that of Ulysses, who must also have been thought a liar when he recounted similar stories of the terrible Laestrygonians and the Cyclopes to Alcinous. As we can see, there is little shortage of material from antiquity which provides us with an insight into the Roman perception of Egypt upon its assimilation into a province. Ian Shaw examines why, even in its earliest days as a province, Egyptian culture remained a constant source of fascination to the Roman minset: 'Egypt was a land apart - an exotic and distant part of the empire, perhaps more bizarre than any other province. Here, pharaonic culture thrived and a visitor to Roman Egypt would have found himself in a time capsule, for the sights, sounds, and customs of Roman Egypt would have had more in common with pharaonic civilisation than with contemporary Rome.' (2000: 414) It is perhaps this very idea - that Egypt was so far culturally removed from Rome - which Augustus played upon during his campaign with Antony. He sought to transform this fascination into fear, as can be observed in many written sources composed in the years after Actium. As Roger Matthews summarises: 'How much the generally negative image of Egypt, which prevails among Roman writers of the first century AD, owes to Augustus' negative propaganda is illustrated by a passage in Tacitus. ...read more.