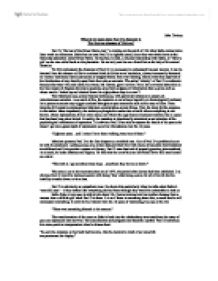 What do we learn about Paul D's character in the first two chapters of 'Beloved'.

John Diviney What do we learn about Paul D's character in The first two chapters of 'Beloved' Paul D, "the last of the Sweet Home men," is waiting on the porch of 124 when Sethe comes home from work one afternoon. Sethe has not seen Paul D in eighteen years, since they were both slaves at the Kentucky plantation called Sweet Home. He has had, in total, a 24-year relationship with Sethe, or 'Halle's girl' as she was called back on the plantation. He not only saw her as a friend but as the lady of his sexual fantasies. To fully understand the character of Paul D it is necessary to understand his past: slavery. It can be denoted from the absence of Site's murdered third child that as an institution, slavery necessarily shattered its victims' traditional family structures or stopped bonds from ever forming. Slaves were thus deprived of the foundations of any identity apart from their role as servants. The actual 'identity' of Paul D is unknown because that wasn't his real name; his owner, Mr. Garner, gave it to him. Not a lot is revealed about him in the first couple of chapters but many questions arise from snippets of information that is given such as where was he 'locked up and chained down for eighty-three days in a row'? ...read more.

Paul D is obviously an empathetic man. He shows this particularly when he talks about Sethe's 'merciful eyes' - if they looked like everything she had been through they would be unbearable to look at. Sethe finds it very easy to talk to him about life. Denver notices how her mother changes from a woman into a childish girl when Paul D is there. It is as if there is something about him, a sense that he will understand everything. It could be his wisdom from his 18 years of wandering, his eyes or his life. "There was something blessed in his manner." The transformation of the scars on Sethe's back into the chokecherry tree transforms her story of pain and repression into survival. Her scars become and poignant and beautiful symbol. Paul D reinforces this more positive interpretation when he kisses them: "he saw the sculpture on her back had become, like the decorative work of an ironsmith too passionate for display." Paul D feels he is the 'man of the house' as he is the only male figure present in 124 for a number of years. ...read more.

Paul D introduces us to a new character called Sixo who had to walk for over 30 miles to be with his lover and had idealistic plans of how they would spend their time but in the end it was a quick 'session' on the floor and it meant everything to them both. Paul D walked for 18 years, experienced what he wanted and was disappointed. To Sixo making love meant everything but to Paul D it was just fulfilling a fantasy. Paul D is a complex character but Morrison only chooses to reveal certain bits of information about him through different narratives throughout these two chapters to increase the mystery surrounding him. In both chapters she uses an omniscient point of view where she can see into the minds of all characters. She fluidly moves from the thoughts of one character into the thoughts of another. As Sethe thinks about Halle's gentle lovemaking in the cornfields (in contrast to the unsatisfactory lovemaking that has occurred with Paul D) Paul D remembers watching the couple with jealously. We learn a lot about Paul D in the first two chapters but it is very evident that there is a lot more to discover about the life of this man. ...read more.