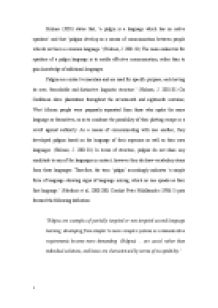 What do you understand by Pidgins and Creoles? Discuss with examples why these languages are not corrupt or ungrammatical.

ï»¿Holmes (2001) states that, ‘a pidgin is a language which has no native speakers’ and that ‘pidgins develop as a means of communication between people who do not have a common language.’ (Holmes, J. 2001:81) The main endeavour for speakers of a pidgin language is to enable effective communication, rather than to gain knowledge of additional languages. Pidgins are contact vernaculars and are used for specific purpose; each having its own ‘describable and distinctive linguistic structure.’ (Holmes, J. 2001:81) On Caribbean slave plantations throughout the seventeenth and eighteenth centuries, West African people were purposely separated from those who spoke the same language as themselves, so as to condense the possibility of their plotting escape or a revolt against authority. As a means of communicating with one another, they developed pidgins based on the language of their superiors as well as their own languages. (Holmes, J. 2001:81) In terms of structure, pidgins do not share any similitude to any of the languages in contact; however they do draw vocabulary items from these languages. Therefore, the term ‘pidgin’ accordingly indicates ‘a simple form of language showing signs of language mixing, which no one speaks as their first language.’ (Mesthrie et al, 2000:280) Creolist Peter Mühlhausler (1986:5) puts forward the following definition: ‘Pidgins are examples of partially targeted or non-targeted second-language learning, developing from simpler to more complex systems as communicative requirements become more demanding. (Pidgins) … are social rather than individual solutions, and hence are characterised by norms of acceptability.’ However, Mesthrie et al (2000:280) states that ‘matters can be a bit more complicated.’ Therein, researchers find it purposeful to make a distinction between pidgins in terms of how complex their grammatical structures are. Firstly, a jargon or pre-pidgin has somewhat unstable structure in the sense that it consists of rudimentary vocabulary, being ‘frequently augmented by gestures.’ (Mesthrie et al, 2000:280) Thus a pre-pidgin is not considered to be grammatical and in some instances may be thought of as a corrupt form of language. ...read more.

As a contrast to the aforementioned deficiency of adverbial suffixes within pidgin languages, the stable pidgin Fanakalo of South Africa shows the occurrence of numerous verb suffixes. However, grammatical marking in Fanakalo is comparatively undemanding in contrast to its main source language, Zulu. (Mesthrie et al, 2000:292) The following shows an example of verb suffix occurrence in Fanakalo: -ile (past tense) dlala ?to play? vs. dlalile ?played? -isa (causative) enza ?to do? vs. enzisa ?cause to be done? -wa (passive) pheka ?to cook? vs. phekwa ?is cooked? (Mesthrie et al, 2000:292) It is widely accepted that pidgins are an inferior and substandard form of language yielding low prestige in society, with many linguists labelling them as marginal and insignificant in comparison to languages that have strong grammatical substance. However, Siegel (1996) (in Mesthrie et al, 2000:292) showed, in analysis of pidgin forms, that their structure ?could be more complex than similar structures in the superstrate language.? Siegel (1996) studied the pronoun system of Bislama, a pidgin of Vanuatu. He discovered that Bislama does not make any distinction in gender pronouns, (a grammatical element that is often omitted in pidgins) and may therefore appear to be simpler in structure than in English language wherein the gender forms he, she and it are used. However Bislama differentiates between ?inclusive? and ?exclusive? pronouns, a distinction which the English language does not include. Therein, Bislama uses the first-person inclusive pronoun ?yumi,? meaning ?we or us, including you,? and the divergent first-person exclusive pronoun ?mifala,? meaning ?we or us, not including you.? Therefore, Bislama grammar makes it explicit whether the listener is included (yumi) or not (mifala). (Mesthrie et al, 2000:292) The complexity of the inclusive and exclusive pronouns in Bislama is attributable to extended, rather than restricted pidgin forms. These grammatical rules demonstrate that although a pidgin is a diffused adaptation of input languages, they carry their own grammatical structure that is largely effective and successful in communication, although composed of both simplified structure and limited vocabulary. ...read more.

This however, is not necessary purely due to the power of inference and implication, of which Creole forms often rely upon. Pidgins and Creoles can be considered grammatical and uncorrupted forms of language in the sense that they both have their own grammatical regulations, albeit not as complex as their substrate and superstrate languages. Furthermore, the primary endeavour of a pidgin is to effectively communicate when one or more languages are unintelligible: this endeavour is successful, thus a pidgin can consequently be regarded as a recognisable form of language. In addition, a Creole is a language that has become the first language of a speech community; therein the grammatical structure, as well as vocabularical elements develop accordingly and become an inherent fixture of the Creole. With regards to the examples provided, they illustrate that both pidgin and Creole forms constitute their own unique grammar and vocabulary, formed from one or more ‘full’ languages. The creation of a new language form should not be considered neither ‘ungrammatical’ nor ‘corrupt,’ as language will inevitably continue to develop and revolutionise in accordance with societal needs. REFERENCES Bakker, P (1995) ‘Pidgins’ in Arends et al. (eds) pp 25-39 Bickerton (1976) Pidgin and Creole Studies. Annual Review of Anthropology, Vol 5, pp 169-193 Hall, R, A (1966) Pidgin and Creole Languages. Ithaca: Cornell University Press. Hewitt, R (1986) White talk, Black talk – Inter-racial friendship and communication amongst adolescents. Cambridge University Press, Cambridge. Holm, J (1988) Pidgins and Creoles. Vol 1: Theory and Structure. Cambridge University Press, Cambridge. Holmes, J (2001) An Introduction to Sociolinguistics. 2nd ed. Pearson Education Limited, Edinburgh Gate. Lefebvre, C (2004) Issues in the study of pidgin and creole languages. John Benjamins Publishing Company. Mesthrie et al (2000) Introducing Sociolinguistics Edinburgh University Press, Edinburgh. Montgomery, M (1995) An Introduction to Language and Society. 2nd ed. Routledge, London. Mühlhausler, P (1986) Pidgin and Creole Linguistics. Basil Blackwell, Oxford. Romaine, S (1988) Pidgin and Creole Languages. Longman, London. Todd, L (1984) Modern Englishes: Pidgins and Creoles. Blackwell Publishing, Oxford. Todd, L (1994) ‘Pidgins and Creoles,’ in R, Asher (ed.), The Encyclopedia of Language and Linguistics. ...read more.