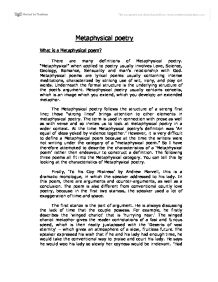 What is a Metaphysical poem?

"Let us roll all our strength and all our sweetness up into one." Marvel has very cleverly used the urgency in the poem to apply to time and sexual activity. There is an image of someone who is toothless and this represents time. The end of the poem used monosyllabic words "Yet we will make him run" and this is a common characteristic of a metaphysical poem. In many of Marvell's poems we find the same eight syllable iambic line, yet its effect can vary remarkably. The vigorousness of the argument appears in the breathless lines. Few lines are end-stopped, and the lines have rough power of speech. In addition, Marvell manages to marry a syllogistic framework with a passionate poem of seduction. The second poem is written by John Donne "Elegie: To his Mistress going to Bed." The beginning of this poem is a classic sign of a metaphysical poem; it has a very strong and dramatic opening. It contains images of war and has alternative images all the way through, this is classic of a metaphysical poem. The subject is then changed to astronomy; Donne is talking about a "Geocentric universe." He also uses a clich� from pastoral poetry, " Flowery meeds th' hills shadow steales." The similarities in the metaphysical poems that focus on religion is that poets often stretch the boundaries of what would have been acceptable at that time. ...read more.

The flea becomes a beautiful, weightless object. Donne uses another common characteristic of Metaphysical poetry, he is 'over-doing' the melo-drama and using an alliteration: 'false, fears bee.' The final line finishes the poem in the typical way in which all of the Metaphysical poems end this is with monosyllabic words. The final line is about honour, which has very little to do with the rest of the poem it is false logic, yet emphatic. This is common structure for a Metaphysical poem, finishing with a complete change of direction in the argument. So to summarize, Metaphysical poetry can involve love, science and religion. Usually this follows a structure of beginning with a powerful line to start and prolonging the conceit all the way through the poem. Marvell uses this particularly technique quite often, drawing upon philosophy to illustrate his argument and giving the poem an intellectual appeal, not just a visual one. Also underneath this formal structure is the poems argument. The poems follow a structure within a syllogistic framework, which begins with an initial foundation, then introduces a requirement to the foundation, and ends with a resolution to the conflict. The three poems I have studied have contained wit, clich�s, irony, word play and alliterations; all theses things make up a good Metaphysical poem. Although the poems I have studied have different subject matters they have all contained the main components and have been written with wonderful use of language. Both Donne and Marvell are extremely intelligent which is way they managed to write such great poetry. By Claire Gittoes ...read more.