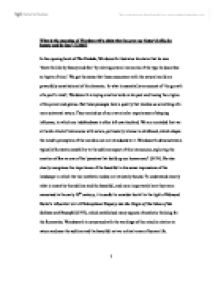 What is the meaning of Wordsworth's claim that he grew up 'foster'd alike by beauty and by fear' (I:306)?

What is the meaning of Wordsworth's claim that he grew up 'foster'd alike by beauty and by fear' (I:306)? In the opening book of The Prelude, Wordsworth illustrates his claim that he was 'foster'd alike by beauty and fear' by relating several memories of the type he describes as 'spots of time'. We get the sense that these encounters with the natural world are powerfully constitutional of his character. In what is essentially an account of 'the growth of a poet's mind', Wordsworth is laying creative hold on his past and tracing the origins of his power and genius. But these passages have a quality that teaches us something of a more universal nature. They remind us of our own similar experiences of shaping influence, to which our indebtedness is often left unarticulated. We are reminded that we all hold a kind of intercourse with nature, particularly intense in childhood, which shapes the mind's perception of the world as we are introduced to it. Wordsworth demonstrates a typically Romantic sensibility to the sublime aspect of this intercourse, exploring the emotion of fear as one of the 'passions that build up our human soul' (I:434). He also clearly recognizes the importance of the beautiful in his sense impressions of the landscape in which the two aesthetic modes are intricately bound. To understand exactly what is meant by the sublime and the beautiful, and more importantly how they were conceived in the ...read more.

This type of discourse calls to mind the theory of object-relations psychology, particularly the work of D.W. Winnicott on transitional objects and the origins of creativity. Winnicott says 'It is creative apperception more than anything else that makes the individual feel that life is worth living'(p.65).What he refers to as creativity in the infant, Wordsworth calls the first 'Poetic spirit of our human life' (II:276). He goes on to present the human mind as a reconciler of oppositions, a faculty of concordia discors, by comparing it to the 'harmony of music' (I:352). Poetry, like music, can synthesize, discordant elements and find a balance between the sublime/fear and the beauty/love. The beauty and fear Wordsworth believes to have been have been part of his upbringing correspond to what he calls the 'interventions' (I:370) of nature, whether they be gentle or severe. He conceives the theft of the shepherd's boat in book I to be one such intervention. As he embarks, the scene appears one of perfect equilibrium between the beautiful and the sublime with the lake 'shining clear / Among the hoary mountains'. Once again, Wordsworth feels ambivalence towards his act of transgression; he calls it an act of 'troubled pleasure'. However, his flight begins as one of calmness, safety, and smoothness - qualities of the beautiful. Nature's intervention - the sudden apparition of the huge cliff - displays typically sublime characteristics. ...read more.

Wordsworth is pointing out that it is regressive in someway to live only with comfort and to remain within the sanctuary of our four walls; we must venture outside. This is something similar to Winnicot's notion that living compliantly - in this case with plain comfort and no more - is the sign of an unhealthy mind. Wordsworth might take it as an example of an unpoetic mind; he would deem remaining among the artificial as anti-creative. Wordsworth's claim that he grew up 'foster'd alike by beauty and by fear' has a great many implications. One might say the passages surrounding this claim are written in the language by which our passions are known to us. They focus on acts of desire that emphasis the fact that doing has implications for being. Wordsworth communicates something raw, basic and powerful in his attempt to get to the very core of the nature of our desire. The mind as our faculty of desire and reason finds itself in a constant struggle to find a synthesis we can be happy with as we react with the world. In order to be happy, and well, we need both beauty and fear. Wordsworth is aware that he could not have been healthily fostered exclusively by one or the other. He is defining his ability to fashion meaning out of the great paradoxes of life. Although the imagination is not yet referred to here, we can already see the why he considers it a quintessential power of the human mind. ...read more.