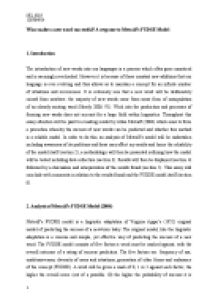 What makes a new word successful? A response to Metcalfs FUDGE Model

﻿SEL 3025 103784924 What makes a new word successful? A response to Metcalf?s FUDGE Model 1. Introduction The introduction of new words into our languages is a process which often goes unnoticed and is seemingly overlooked. However it is because of these constant new additions that our language is ever evolving and thus allows us to maintain a concept for an infinite number of situations and occurrences. It is extremely rare that a new word will be deliberately coined from nowhere; the majority of new words come from some form of manipulation of an already existing word (Harely 2006: 91). Work into the production and processes of forming new words does not account for a large field within linguistics. Throughout this essay attention will be paid to a leading model by Allan Metcalf (2004) which aims to form a procedure whereby the success of new words can be predicted and whether this method is a reliable model. In order to do this, an analysis of Metcalf?s model will be undertaken including awareness of its problems and these may affect my results and hence the reliability of the model itself (section 2); a methodology will then be presented outlining how the model will be tested including data collection (section 3). Results will then be displayed (section 4) followed by a discussion and interpretation of the results found (section 5). This essay will conclude with comments in relation to the results found and the FUDGE model itself (section 6). 2. Analysis of Metcalf?s FUDGE Model (2004) Metcalf?s FUDGE model is a linguistic adaptation of Virginia Apgar?s (1952) original model of predicting the success of a new-born baby. The original model, like the linguistic adaptation is a concise and simple, yet effective way of predicting the success of a new word. ...read more.

However, if, as in the example above, the problems can be seen to affect the viability of the prediction, it is pointless. For that reason, if he expanded some of the ideas behind his factors and accounted for some of the problems, the method would possibly prove more effective. Subsequently, if Metcalf were to show awareness of some issues within the model, such as having to award technical jargon a Diversity level of 0, amendments could be made which could result in more accurate predictions. 3. Methodology The idea behind the FUDGE model is that it gives us a way of measuring a new word and thus a way of predicting its success. I will respond to the model by using its factors to measure my own data set from the year 1910 against, and consequently look at how effective it claims to be. I will do this by collecting a data set, measuring it against each factor by giving the word a score of 0, 1 or 2 and then look further at the words which make up the data set to see if they are still being used in present day English. The results of whether the words are still in use today will then be correlated to the FUDGE scores which my words were awarded. This will then allow me to show whether the FUDGE model does in fact provide an effective way of predicting the success of a new word. I will also draw on some of the problems highlighted above in relation to my data set, and suggest ways in which these may have affected my results. 4. Data Collection My initial data set consisted of one hundred words which were randomly selected from the Oxford English Dictionary online (OED) from the year 1910. ...read more.

6. Conclusion To conclude, Metcalf?s FUDGE Model (2004) offers a way of predicting the success of new words which are ever infiltrating our language. To test the effectiveness and reliability of the model, an original data set of one hundred words from the year 1910, later compressed to a more concise set of forty was chosen. The words which formed the data set were then analysed in relation to the model, and assigned an overall FUDGE score, with scores ranging from one to eight. To then test the reliability of the scores, the words were searched in the COCA corpus. It was found that out of forty, thirteen FUDGE scores were not accurate in that they did not correlate with the supposable success prediction from the model which the scores implied. Therefore the results indicate that, although the model for the most part works as a successful, effective way of predicting a new words success, it cannot always be deemed reliable. This may be due to the drawbacks it possesses in that some of its factors remain too general and cannot account for all word types. To a certain extent, Metcalf?s FUDGE Model (2004) works as an effective way of predicting the success of new words. However its problems need to be taken into account when interpreting results which the model yields. It needs to be remembered the results may not be one hundred percent accurate, however can provide us with a firm idea, in most cases, of a success prediction. To further test the model?s effectiveness and gain a better understanding of whether the problems mentioned in section 2.1 pose a fundamental threat, data samples from a wider range of time periods could be analysed in relation to the model. This would hopefully allow us to gain a deeper understanding of its value of the FUDGE model in this field of new words in language. ...read more.