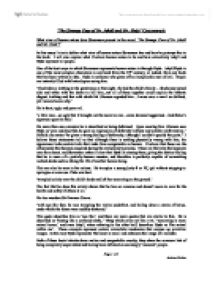 What view of human nature does Stevenson present in the novel, 'The Strange Case of Dr. Jekyll and Mr. Hyde'?

'The Strange Case of Dr. Jekyll and Mr. Hyde' Coursework What view of human nature does Stevenson present in the novel, 'The Strange Case of Dr. Jekyll and Mr. Hyde'? In this essay I aim to define what view of human nature Stevenson has and how he portrays this in the book. I will also explore what I believe human nature to be and how collectively Jekyll and Hyde represent all people. One of the best ways in which Stevenson represents human nature is through Hyde. Jekyll/Hyde is one of the most complex characters in any book from the 19th century, or indeed, from any book that has been written to date. Hyde is someone who gives off an inexplicable aura of evil. People are instantly filled with hatred upon seeing him. 'I had taken a loathing to the gentleman at first sight. So had the child's family... Sawbones turned sick and white with the desire to kill him...not all of these together could explain the hitherto disgust, loathing and fear with which Mr Utterson regarded him...I never saw a man I so disliked, yet I scarce know why.' He is short, ugly, and pure evil. 'a little man...so ugly that it brought out the sweat on me...some damned Juggernaut...had Satan's signature upon his face.' On more than one occasion he is described as being deformed. ...read more.

Pope seems to have a similar view on human nature to Stevenson in that they both thought that human nature was what made us do bad things and that to be flawed is to be human. Jekyll/Hyde truly is a mixture of good and evil. In this way Jekyll's experiment failed. He set out to separate good and evil and rid himself of evil tendencies. Instead, in some ways he brought them closer together. Before the experiment he was a respectable gentleman, after the experiment he became reclusive, he forced his friends and trusted servants to be suspicious of him and eventually struggled to maintain his own form and state of mind. Utterson and Enfield also represent human nature quite well. Utterson is another of the books complex characters. 'never lighted by a smile; cold...embarrassed in discourse...dreary, yet somehow loveable...something eminently human beaconed from his eye...drank gin when he was alone, to mortify a taste for vintages; and though he enjoyed the theatre, he had not crossed the doors of one for twenty years...sometimes wondering, almost with envy' This description tells us Utterson is dull and cold, untalkative. He is a strange character and it seems hard to believe that he could be loveable. It seems that he has suppressed his emotions and everything that makes him human. He has buried away all interests and indulgences, his taste for fine wines and love of the theatre, although 'something eminently human beaconed from his eye.' ...read more.

Stevenson's view could also be linked to the Bible and religion generally, which were very important during the Victorian era. Morals were held in high regard and by having them you would gain great esteem. All his characters possess one or more of the 7 deadly sins: Anger, Envy, Lust, Greed, Gluttony, Vanity, and Sloth. These are things no righteous human being ought to have. They counter-balance the 7 virtues. All his characters possess at least one of these as well: Faith, Hope, Charity, Justice, Fortitude, Prudence, and Temperance. These are things all righteous human beings ought to have. Personally I find it difficult to subscribe to this blinkered and one-dimensional view of good and evil. No real human being is completely free of sin, just as no human being is completely free of virtue. This is the very essence of human nature, that to be imperfect is to be human, and to some extent this is why Jekyll's experiment failed. After all, what he was attempting to do was impossible. One cannot separate the two sides of human nature because they are so intrinsically bound together. I conclude that Stevenson believed everyone had good and bad characteristics. You can't escape human nature and I think Stevenson realised this. This was a view that was very ahead of its time as Freud was only just forming the basis of psychoanalytical practice. By Andrew Parker ?? ?? ?? ?? Page 1 of 5 Andrew Parker ...read more.