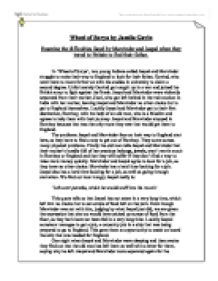 Wheel of Surya by Jamila Gavin. Examine the difficulties faced by Marvinder and Jaspal when they travel to Britain to find their father.

Jaspal and Marvinder start to go to school and Jaspal is anxious to know what his father works as, everyone tells him that his father is a businessman but Jaspal didn't find that helpful enough. Marvinder is more relaxed and excited to spend more time with Dr Silberman to listen to the violin and being able to share each other's feelings: 'She felt strangely relieved, as though someone else was sharing her burden now' This quote tells us that Marvinder is expressing her feelings and thoughts about the past to Dr Silberman because he's the only one capable of listening, as something terrible had also occurred in his past life. She feels comfortable speaking with Dr Silberman because he is a reminder of the Chadwick and they also played the violin that Marvinder loved listening to. You can realize so far that both Marvinder and Jaspal have different issues about everyone. His father and what he has become disgust Jaspal and Marvinder does not seem to be bothered as much as Jaspal. They both now have their own problems to overcome or solve themselves, which has been bothering them for a long time. One day Jaspal decides to follow Govind to his work destination to find out the truth. He struggles to keep up with him but manages to get there. He finds out what his father is and is not proud of it: 'He's nothing but a conman' In this quote we are told what Govind is. ...read more.

Marvinder finds Jaspal and is taken home after a while. In the house the Chadwick family arrive and remember the past that they shared with Govind and his family. Everything was back to normal as the police heard Jaspal's side of the story, which bailed Govind out. After a few days Jaspal has some visitors. He made some friends and is excited and his mind full of hatred is cleared off and Marvinder learned how to play the violin and had a gift from Dr Silberman, a violin. It was all thanks to Tom Fletcher for finding Jaspal and Marvinder or else they never would've got to England without his help. Searching for Govind was no problem as there were a few people who new him to track him down, but the biggest problem was to learn to trust the stranger their father has become because they travelled hundreds of miles and the biggest risk was leaving their mother back in India when they were looking for Govind who now has become a conman and sells illegal items and betrayed his religion, but especially his family, which he had almost forgotten about as he did re-marry. Marvinder doesn't have a big deal with that, as she's concerned about other things, she gets over it really quickly but Jaspal has a hard time facing the truth about his father but realizes that he still does have feelings for them but he never gets over it like it was in India. ...read more.