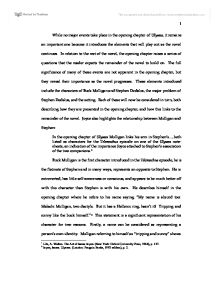 While no major events take place in the opening chapter of Ulysses, it remains an important one because it introduces the elements that will play out as the novel continues.

While no major events take place in the opening chapter of Ulysses, it remains an important one because it introduces the elements that will play out as the novel continues. In relation to the rest of the novel, the opening chapter raises a series of questions that the reader expects the remainder of the novel to build on. The full significance of many of these events are not apparent in the opening chapter, but they reveal their importance as the novel progresses. These elements introduced include the characters of Buck Mulligan and Stephen Dedalus, the major problem of Stephen Dedalus, and the setting. Each of these will now be considered in turn, both describing how they are presented in the opening chapter, and how this links to the remainder of the novel. Joyce also highlights the relationship between Mulligan and Stephen: In the opening chapter of Ulysses Mulligan links his arm in Stephen's....both listed as characters for the Telemachus episode on one of the Ulysses note-sheets, an indication of the importance Joyce attached to Stephen's association of the two companions.1 Buck Mulligan is the first character introduced in the Telemachus episode, he is the flatmate of Stephen and in many ways, represents an opposite to Stephen. He is extroverted, has little self-awareness or conscious, and appears to be much better off with this character than Stephen is with his own. He describes himself in the opening chapter where he refers to his name saying, "My name is absurd too: Malachi Mulligan, two dactyls. But it has a Hellenic ring, hasn't it? Tripping and sunny like the buck himself."2 This statement is a significant representation of his character for two reasons. Firstly, a name can be considered as representing a person's own identity. Mulligan referring to himself as "tripping and sunny" shows his carefree attitude, while also showing that he has an outward focus. ...read more.

Bloom is a middle-aged man whose only son died. This leaves Bloom with a hole in his life that can be filled by taking on a fatherly role; making Bloom what Stephen is looking for, and Stephen what Bloom is looking for. The central plot of the novel then revolves around these two individuals meeting and the eventual bond that forms between them. The setting of the novel is also introduced in the first chapter. This is especially important because the novel offers criticism on Irish society at that time. As noted earlier, Mulligan and Stephen are opposites in terms of their characteristics and in terms of how successful they are. While Mulligan has the lesser character, it is Mulligan that is more successful in life. This offers a criticism of society by raising questions about why those of lesser character should be the ones succeeding. At the beginning of the first chapter, Mulligan is introduced with the following paragraph: Buck Mulligan came from the stairhead, bearing a bowl of lather on which a mirror and a razor lay crossed. A yellow dressinggown, ungirdled, was sustained gently behind him by the mild morning air. He held the bowl aloft and intoned: Introibo ad altare Dei.12 This description offers an image of Mulligan as a king. Coming from the stairhead, creates an image of Mulligan descending from the stairs in a palace. The dressinggown "sustained gently behind him" creates an image of the royal robes of a king.13 Holding the bowl aloft and speaking creates an image of a king addressing his subjects. The language in this paragraph also has a distinguished tone that suggests royalty. For example, he is not carrying a bowl of lather, he is "bearing" a bowl of lather. The dressinggown is not just flowing behind him, but is "sustained gently behind him by the mild morning air."14 He is not just holding the bowl up, he is holding it "aloft." ...read more.

Instead, he must actually work through his issues. This also means that Stephen is the only one capable of being cleansed, since the process is an introspective one. Mulligan can bathe as often as he likes, but will never be cleansed unless he achieves an introspective outlook and is able to see beyond appearances, suggesting that the hope in society lies with the character of Stephen and what his character represents. The final aspect introduced in the first chapter is the mood. The novel is about everyday life for average people in society, and this brings with it many depressing images. Even the major characters of Bloom and Stephen have major flaws that are not resolved. The characters do achieve a suitable resolution, but they remain far from perfect. This creates a depressing image of society. This aspect of the novel is balanced by the comic mood that persists throughout the novel. This begins in the first chapter, with the distinction between what is being described and how it is being described adding the comic element. For example, Mulligan is described as if he is a king emerging in the morning and descending to speak to his subjects. In reality, he is walking down the stairs with his shaving utensils and speaking to his flatmates. This mood continues throughout and is important for its ability to even out the depressing nature of the material. The elements presented in the first chapter have now been described in some detail. It has been seen that the first chapter introduces various elements and raises many questions. These questions then become a driving force, leading the reader to an exploration of the questions and to an eventual answer. In addition, the first chapter introduces the style elements of the novel, with these establishing the mood of the novel, and also contributing to the themes. Overall then, it can be seen that the first chapter is a crucial part of Ulysses, not because any major events happen, but because it introduces all the elements that the remainder of the novel will build on. ...read more.